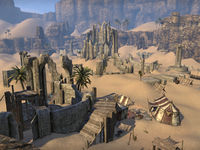 Salas En is a large Ayleid ruin found on the mountainous reaches of the Alik'r Desert, in the province of Hammerfell. Situated on the rocky coast of Cape Shira, it has been inhabited by many civilizations throughout the years until it was eventually abandoned in the later years of the First Era. Ever since then, the fallen city has been left untouched by the locals for countless years, and has not been studied since at least the mid-Second Era.[1]

Salas En was founded by the Ayleids of the Merethic Era and it was built by their human slaves.[2] The history of these elves is virtually non-existant and eventually, they were no longer present in the area. By the sixth century of the First Era, it was inhabited and even expanded upon by the Corelanya Clan, a large group of Daedra-worshiping Altmer. Among the High Elf relics were Bosmer relics, which implies that either the Corelanya traded with the Wood Elf merchants, or that the ruins were used as a stopover by the Bosmer before the Clan took control of Salas En. In any case, the Corelanya Clan lived in their new city of Salas En for about three hundred years until an invasion force came from across the Sea of Pearls.[1]

In 1E 853, King Xakhwan of Yath and his Crowns landed on the shores of Cape Shira, until they were displaced by the Corelanya Clan.[3] In protest, the King amassed his forces, the Ra Gada with his sons, the Crown Prince Sameer and Haqmir and launched an invasion force against the clan at the old Ash'abah Pass. The battle ended when Prince Sameer killed Kinlady Iniel at the edge of the coast.[4] Since then, the Yathi Redguards lived in Salas En. All of it came to an end when the city was abandoned by the people in the twenty-third century of the First Era, around the time of the Thrassian Plague in 1E 2200. The ruins were left alone ever since.[1]

During the Interregnum in 2E 582, the ruins were explored by a group of Breton researchers and the known historian, Lady Clarisse Laurent. They came to Salas En to learn more about the Ayleid civilization that lived there in the Merethic Era.[1] While searching through the ruins, she inadvertently brought an Aldmeri Dominion invasion force, who came in through a portal from another ruin in Grahtwood. With the help of an assistant, the two were able to push back the Dominion and close off their portal.[5] At around the same time, a time breach had opened near Salas En and so the Psijic Order were sent to close it.[6]