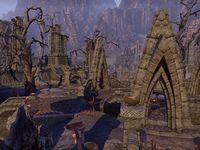 Eagle Moor during the Imperial Simulacrum

Othrenis (alternatively called Eagle Moor[nb 1]) is a necropolis located in the region of Stonefalls, within the province of Morrowind. Othrenis contains the remains of the group of mages that sealed the Brothers of Strife during the First Era.[1] Their leader, Mavos Siloreth is kept at the largest crypt of the necropolis, which overlooks the entire area.

During the First Era, the Chimer of Stonefalls were at war with the barbaric tribes of the Nedes. The Chimer were in a losing battle, and so they took drastic measures and created the Brothers of Strife, two hulking Bone Colossus that wreaked havoc across the land, slaughtering both Chimer and Nede alike, even the women and children. In order to stop them, a group of mages from Vvardenfell were sent to seal away the Brothers of Strife.[2] The group had sealed Balreth at an area known as the Charred Ridge, where Mavos Siloreth had sealed him away in Ash Mountain. Siloreth, and various others would pass away and later be interred into Othrenis.[3]

During the Interregnum in 2E 582, the Daggerfall Covenant had invaded the region of Stonefalls, having laid siege over the harbor-city of Davon's Watch. In order to break their siege, Tanval Indoril, the then Grandmaster of House Indoril, had re-awakened Balreth, who decimated the invading armada, however, Balreth had gone loose in the region of Daen Seeth, and so the Ebonheart Pact had sought a way to reseal Balreth into Ash Mountain. An Agent of the Pact had arrived onto Othrenis, seeking to re-awaken Mavos Siloreth and gain the knowledge to seal the Brother of Strife. After everything, the information necessary to seal Balreth was acquired and so the Pact was able to seal Balreth into Ash Mountain and continue their battle with the Covenant.[3][4]

During the Imperial Simulacrum in the late Third Era, the town of Eagle Moor was an active settlement, being ruled by Prince Zirimal. It had a rivalry with Silnim Dale and Oaktown.[5] It was neighbored by several settlements, including Darnim Watch in the northeast, Ebonheart in the north, Mournhold and Old Keep in the southeast.[6]