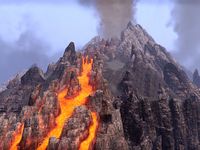 Ash Mountain is a volcano in southeastern Stonefalls, in the Daen Seeth region, west of the town of Senie and east of Ebonheart. The mountain is surrounded by the Daedric ruins of the Great Temple of Boethiah, constructed by the Chimer prior to the ascension of the Tribunal.[1] It also houses a small ruined shrine to Molag Bal. Large numbers of scamps and clannfear can be found in the ruins, along with shalk near the lava flows.[2]

The volcano served as a prison for Balreth, one of the Brothers of Strife. In 2E 582, Tanval Indoril, the grandmaster of House Indoril, summoned Balreth and ordered him to destroy the Daggerfall Covenant army attacking the city of Davon's Watch. Balreth routed the invading army before they entered the city, but he was deemed too dangerous to remain unbound. With the help of the Vestige and the spirit of Mavos Siloreth, a Chimer who had originally bound Balreth in the First Era, Balreth was defeated beneath the Ash Mountain and his spirit was bound again.[2]