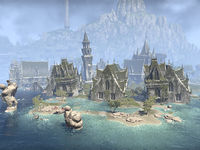 The ruins of Corgrad Wastes circa 2E 582

Corgrad Wastes (originally just Corgrad)[1] is a sunken city located along the northern coast of the Summerset Isle, in the province of the Summerset Isles. Corgrad was once a prospering city, before it was heavily afflicted by the Thrassian Plague in the late First Era. Its ruins have since mainly been inhabited by scavengers.

The Corgrad Wastes are situated on the northern coast, northeast of the city-state of Lillandril, and just west of the entrance to the Crystal Tower, on the western slopes of Eton Nir. Corgrad itself was built beneath the sea level, and the destruction of a wall was the cause of the city's submersion. The city contains various buildings and has an underground cavern system directly beneath it. The outer ruins have been inhabited by various creatures, including Salamanders and Reef Vipers. But certain houses have passageways to the underground caves, which are riddled with ancient ruins and stalactites. The water from the Sea of Pearls flow into the caves, slowly flooding them.[2] It was neighbored by several settlements, including Graddun Spring in the north, and Kings Haven in the northeast, and Marbruk Brook in the southwest.[3]

In 1E 2200, the city-state of Corgrad was ruled by Kinlord Nemfarion, who reigned at the time of the Thrassian Plague. One fateful day, a fleet of fishermen came into Corgrad harbor with a large bounty of fish. The fishermen were afflicted, and so were taken into the underground caverns to be quarantined. As time went on, more and more people were quarantined in the underground, as the disease continued to spread across the city. At one point, the Kinlord had issued a decree, which would have no one leave or enter Corgrad until the situation was dealt with. However, the Plague continued to spread for months until the entire settlement had succumbed to it.[4] The nobles of Corgrad, including Nemfarion, were able to save several people but were slowly dying of the disease. Seeing no other way to prevent the Plague from spreading, Nemfarion destroyed the wall on the city's western side, which held back the sea, drowning the affected in their homes. The people they had managed to rescue used spells to prolong the nobles' lives, but they could not get rid of the disease; the only way to cure them was to pass it onto a relative. While most of Corgrad's population died, the people living in the underground caves survived there for many generations. Eventually, the Thrassian Plague passed, but what came to be known as the Corgrad Wastes received a foul reputation, many claiming it to be cursed.[5]

During the Interregnum around 2E 582, an Altmer noble descended from the Kinlords of Corgrad—Faidur—came to the Corgrad Wastes, only to find scavengers camping on the outskirts. Faidur demanded that the people leave his home, and he sought the help of a wandering traveler to aid him in his investigation concerning the city's destruction, having been partially submerged into the sea. The two delved into the underground complex where they met the leader of the cave dwellers—an Altmer named Arillas. Arillas tricked the traveler to a dead end, while he took Faidur to the nobles of Corgrad, going by the name, "the Saviors." After hundreds of years of lying dormant, Kinlord Nemfarion and his family were close in getting the cure, but Arillas was killed, and Faidur was freed. Two scavengers trapped in the ruins were rescued, and all four of them escaped the city. The cave dwellers remained in Corgrad Wastes, as Faidur abandoned his home for good.[6]