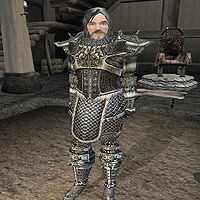 Tharsten Heart-Fang is a Nord barbarian located in the Greathall of the Skaal Village. He is the leader of the Skaal tribe and your quest giver for a part of the Main Quest. Later you meet him in Mortrag Glacier as a werewolf as part of the Bloodmoon Prophecy. He is wearing a near-full set of Nordic mail armor, only excluding the helmet. He is also carrying an enchanted Nordic silver battleaxe (with Weakness to Frost 100% for 10 secs and Frost Damage 30 to 50 pts, on strike). Additionally, the Tharsten you meet who has an ID of tharsten heart-fang2 has a glowing key. Aside from his natural resistance to shock, immunity to frost, ability to shield himself, and a natural frost damage spell, he knows no spells.