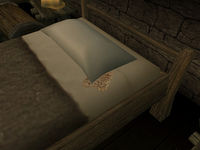 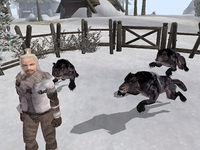 Sacrifice to the wolves

After completing the lengthy Ritual of the Gifts to prove your loyalty to the Skaal, Tharsten Heart-Fang in the Greathall now wants you to prove your wisdom. He asks you to investigate a crime involving Engar Ice-Mane, who is accused of theft, and Rigmor Halfhand. Tharsten explains that Rigmor claims to have had some furs stolen by Engar which were found in his home. If guilty, it is most likely that Engar will be sacrificed to the wolves. You are to investigate the matter and see who is telling the truth.

Both of the homes are close to the Greathall in the small village, so visit both of them to get their stories of the events. Rigmor has nothing much to add, other than he does not know why Ice-Mane stole anything from him. You'll get the same idea from talking to people around town who seem adamant that Ice-Mane is innocent of the crime. Engar is not home, but his wife, Risi, is, so talk to her about the crime. Risi further states that Engar is innocent and suggests that someone, possibly Rigmor, may have framed him to disgrace him. Engar can be found outside wandering just East of his house. He doesn't have much else to add to the information you've already uncovered.

By this time you might have noticed the subtle hints from people that might indicate that Risi Ice-Mane and Rigmor Halfhand had a little intimate relationship, although no one will say that right out. If this were true, it may provide a motive for Rigmor to falsely accuse Engar of theft. Take a closer look around the Ice-Manes' house and under the pillow of one of the beds you'll find a telling Letter from Rigmor to Risi.

Return to Tharsten in the Greathall about the news you've learned and he'll leave the fate of Rigmor up to you, either exile or the wolves. You'll receive the Helm of the Wolf's Heart as your reward, no matter which punishment you choose. If you choose sacrifice, Tharsten will congratulate you on showing Halfhand mercy by letting him die with honor. You are asked to lead the accused to the wolf pen. You'll find Halfhand outside where you'll follow him to the wolf pen where he'll be attacked (the wolves disappear once he dies). It is possible for a very powerful character to kill the three Caenlorn Wolves (which are technically werewolves) before they can kill Halfhand (it helps to run ahead and open the wolf pen before Halfhand enters it), but aside from a slightly different reaction from Tharsten, and Halfhand standing in the wolf pen for the rest of the game, it appears there is little point. One can also Soul Trap two of them (each will fill a Common Soul Gem, rather than the Petty type of the normal werewolf varieties), then let the third do its job. Jumping the fence to do this may make the third wolf just stand there and not kill Halfhand; the gate must be opened before attacking the wolves for their scripting to work properly.