The UESPWiki – Your source for The Elder Scrolls since 1995
< Mod / Skyrim: Beyond Skyrim: Cyrodiil: People
Jump to: navigation, search 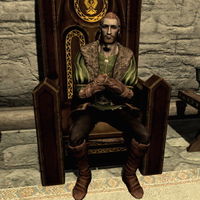 Count Desilus Carvain, an Imperial warrior, is the count of Bruma and a descendant of Countess Narina Carvain. He holds court at the city's castle, collects Akaviri artifacts and maintains a rich retinue of petty nobles. He delegates most of the day to day running of the county to his steward, Rignar, and his brother, Viscount Marcius Carvain.

During Absent Antiquity, guard captain Adius Vilius will task you with recovering some of the Count's priceless Akaviri antiquities, which were recently stolen from the castle. After you've retrieved them, Adius will present you to the Count and he will reward you with some leveled gold. During Service Rewarded, the Count will congratulate you for destroying the criminal gang Thorina's Cutters and bestow upon you the enchanted blade Hvitbrand, a leveled amount of gold and the title of "Friend of Bruma", which allows you to purchase White Pine Lodge.

The Count sleeps from midnight to 7am in the Lord's Manor, before enjoying a two-hour breakfast in the Great Hall. From 9am to 6pm he will then be found in the throne room, holding audience for his subjects to approach him with concerns and requests. After eating dinner in the dining room from 6pm to 8pm, he will retire to his quarters to relax until his bedtime. The only exception to this schedule is on Loredas, when he will travel to the Cathedral of St. Martin to hear mass between 7am and 10am.

As befits his status, the Count is fabulously outfitted with Colovian fine clothes, boots, fine armguards, a gold diamond necklace and a gold jeweled necklace. He also carries a steel tanto, the key to the castle's treasure room and a random assortment of jewelry, gems, gold, lockpicks, food and drink.

There appears to be some conflict between the Count and his guard captain, Adius Vilius, as a few of the guards will remark: "I may serve Count Carvain, but I take commands from the Guard Captain." As Adius tells it, the source of tensions are the Count's stolen Akaviri artifacts: "This damned artifact business doesn't affect anyone except the Count. While I'm chasing after shiny baubles, people are getting killed by bandits and waylaid on the road."

This is again evident when further explaining the theft: "The Count's been nagging my life and soul out about the damned things. You see, the Carvains have a sort of... family tradition. They've acquired a taste for Akaviri artifacts, constantly collecting more and more. Been going on for centuries now. Well, it turns out poor old Count Desilus- ahem, Count Carvain - isn't too happy that his collection's been stolen." If you explicitly ask him about the tensions, he will demur: "No, not tensions as such. Just... I'm tired. I've had four sleepless nights in a row. The Count's talking my ear off about these artifacts, and it's stopping me from tending to more important issues. Err, not that I'm disloyal to Count Carvain, of course. I've never had reason to dislike our ruler. Better him than some of the other counts and countesses in the province."

The Count himself will greet you warmly in the throne room: "Welcome to our fair city. What brings you to Bruma?" If you ask what it's like being Count of Bruma, he will admit: "It's a... complicated task, let's put it that way. On the one hand there are the Imperials, on the other there are the Nords, and then there are the other cultures to contend with as well. And I'd be remiss if I didn't mention that the Stormcloak uprising in Skyrim has... complicated things, to a certain extent. But I'm proud to serve Bruma and her people." When asked about himself he will proudly proclaim: "I am Desilus Carvain. I have the singular honor of acting as Count of Bruma, defending her walls and ruling over her people. I am young - and I know some use this as ammunition with which to criticize me. But they are short-sighted, and they are foolish. I act in the best interests of Bruma at all times. I will always fight valiantly to defend her from threats both within and without. That is what matters."

When asked about the city itself he will gush: "Bruma is the jewel of the Jerall Mountains. A strong and hardy city: Imperial in name, but equally Nordic by blood. And while the county surrounding her is frosty, as viscount Carvain says, the hearts of our people burn brighter than the warmest hearth. We have our share of problems, I won't deny that. But Bruma is a prosperous county, given the times. Compared to Cheydinhal and Bravil, Bruma might as well be paradise. And at least we were spared the horrors of the Great War... mostly."

If you press him on the conflict, he will explain: "It didn't, mostly. And thank the Divines for that. Of course, there were Dominion scouts roaming the Jeralls on occasion, but that's to be expected. Minor skirmishes are not what people refer to when they speak of the "horrors of the Great War", though. They mean the Battle of the Red Ring, they mean the sacking of Anvil. And these are evils that Bruma was spared. Her walls remain unharmed, and her buildings remain upright. That being said, Cyrodiil herself reels after the Great War. Emotionally, and psychologically. It took its toll on the whole province - and Bruma is no exception. Bruma may be spared the physical scars of the Great War, but the mental scars? They run just as deep here as they do anywhere."

He is upbeat about how Bruma is doing now: "Well enough, I suppose. The Great War mostly spared Bruma - thank the Divines for that. Most of Cyrodiil didn't have such good fortune." He is also rather relaxed about any threats to Bruma: "Not particularly, no. I certainly don't envy my friends across the border in Skyrim, though. These are truly dark times for the Empire. Let us hope that this storm blows over as have all the rest. But something makes me think this one's different. I fear Tamriel will never be the same again. If it's work you seek, speak with my viscount, Marcius Carvain."

During Service Rewarded, after bestowing gifts and honors upon you, he will ask you about your motivations for helping Bruma. Regardless of your answer, he will then caution you: "Schemes can be a dangerous business. Don't wrap yourself up in them without careful consideration. I'd hate to meet you as a political opponent if, one day, we found ourselves on separate sides.I'm just warning you, friend. Politics is a dangerous game. Be careful where you tread around counts and nobility. Appearances can be deceiving." After that, he will joyfully greet you with either "You've done a lot for our city, and for me. Welcome, friend of Bruma. Enjoy your stay in our castle, and your time across my fair county." or "Ah, a friend of Bruma! All hail our ally and friend."