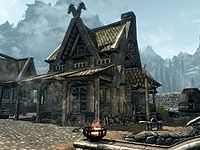 Warmaiden's is a smithy and weapons store in Whiterun. It is located just inside the main gate, right next to Breezehome.

NOTE: Like all other stores, Warmaiden's has a number of fixed wares on display scattered around the main trading room. These can be bought from the proprietors and will disappear from the room when purchased. For a list of these special items, see this section.

During business hours, Adrianne is often smithing in the outside workshop while Ulfberth sells her products inside the store. Both Adrianne and Ulfberth are merchants (see notes), though it is for Adrianne the store was named. Apparently interested in swords even as a child, she received Warmaiden as a nickname from her father.

Without the displayed merchandise, the main trading room is completely empty, save for five food sacks scattered around the room. Ulfberth can be found here every day between 8am and 8pm, offering his merchant services. Behind the counter is a door leading to a small dining area with a burning fireplace and a cooking pot. There is also an alternative exit to Whiterun.

On the balcony of the second floor is a small table with some sliced goat cheese, right next to the door leading to the bedroom. The bedroom contains a minor loot chest in the northwestern corner and, in the adjacent corner, a dresser with some clothes. On top of the dresser sits the store's business ledger, a locked strongbox, and a plate with a boiled creme treat. The double bed stands at the southern wall with an end table on either side, both with clutter. There is a rare copy of Killing - Before You're Killed on top of one end table and a bottle of ale and a loaf of bread on the other.

The workshop outside includes a workbench, a tanning rack, a grindstone, a forge and a smelter.

This is the merchandise found in the Warmaiden's merchant chest. These items are only available if purchased from the merchant; they cannot be pickpocketed or stolen. They are restocked every two days. 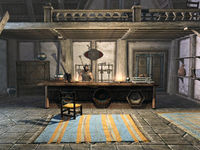 Ulfberth War-Bear at the counter, with the doorway at the right leading to the back room 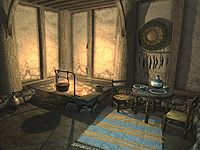