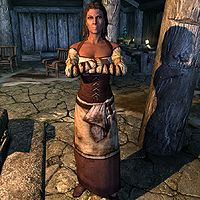 Valga Vinicia is an Imperial and publican of the Dead Man's Drink in Falkreath. She has 100 gold available to barter with and buys food.

She wears a set of barkeep clothes and a pair of shoes. She is equipped with an iron dagger, and carries a key to the inn as well as a selection of common loot and gold.

When you talk to her she will greet you with, "Welcome to Dead Man's Drink." Talking to her further will cause her to reveal some details about her rather eventful life, saying, "I escaped fighting in Cyrodiil only to have it track me down again in Skyrim.", "In Falkreath if I don't know it, it's not worth knowing.", and "I wouldn't complain if we could string together a few sunny days now and then." When you ask her where you can learn more about magic, she'll say, "The people of Skyrim don't like magic much, so about the only place you're likely to find a teacher is the College of Winterhold."

When exiting conversation, she'll say, "You hear any juicy gossip in town, be sure to share it with me!" or "I'll be right here if you need anything else."

She can often be seen conversing with other Falkreath citizens:

Narri: "At some point we should hire Tekla on here. If she could just spend less time serving Dengeir..."
Valga: "I wish I could afford to pay you both, Narri. I really do."

Valga: "Tekla! It's good to see you, girl. How's Dengeir treating you?"
Tekla: "As he should I suppose."
Valga: "Hmmm, well don't take what you don't have to."

Solaf: "Keep them coming and keep them strong, Valga."
Valga: "Will do."