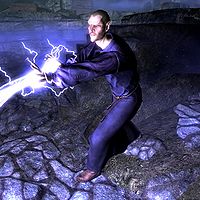 Vaermina Devotees are worshippers of the Daedric Prince Vaermina. They reside in Nightcaller Temple protecting the Skull of Corruption. However, when an Orc war party attacked the temple they released the Miasma, a gas that put everybody to sleep. After Erandur unsealed the temple so he could destroy the Skull of Corruption, the Miasma lifted and the Orcs and devotees began to reawaken.

The devotees wear Vaermina robes and a pair of boots. They carry a leveled potion of restore magicka and one sample of a common-type ingredient.

As they wake up they can say:

This Skyrim-related article is a stub. You can help by expanding it.
Retrieved from "https://en.uesp.net/w/index.php?title=Skyrim:Vaermina_Devotee&oldid=2179929"
Categories:
Hidden categories: