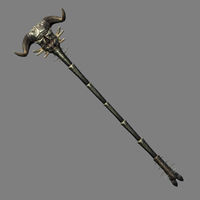 The Skull of Corruption is a dream-powered staff given by Vaermina as a reward for completing the Waking Nightmare quest in Dawnstar. To Dreamsteal, you simply cast it on a sleeping person and it will collect their dreams; however, it will still need to be charged with soul gems as well.

If equipped, guards will make comments about the staff: "What manner of staff is that? Such a horror..." and "What a foul and unnatural weapon you wield. Never have I seen its like."

The staff should never harm a sleeping NPC. Both of the damaging components of the enchantment, Waking Nightmare and Psychic Agony, affect only targets who are awake. Once cast on a sleeping NPC, that NPC gains the Dreamsteal active effect for 43,200 seconds (12 hours). While they have this effect, Dreamsteal won't work on them again. The Dreamsteal component also has neither the Detrimental nor Hostile flags checked, and has No Hit Event and Painless, and therefore should be considered non-hostile by witnesses.

Psychic Agony, the base damaging component of the enchantment, only functions while the staff contains no stored dreams. Therefore, only Waking Nightmare or Psychic Agony can take effect from a single shot, not both.