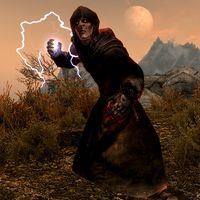 The Traveler is a Nord vampire you may randomly encounter in cities or settlements throughout Skyrim if you have joined the Dawnguard. He wears hooded black robes, vampire boots (armor version), and vampire gauntlets. When he dies, he drops vampire dust, as well as some various potions. He is initially unaggressive when you encounter him, but says "Die Dawnguard!" and turns hostile when you get close. He attacks using various magic spells, including Summon Gargoyle.

This Skyrim-related article is a stub. You can help by expanding it.
Retrieved from "https://en.uesp.net/w/index.php?title=Skyrim:Traveler&oldid=2205497"
Categories:
Hidden categories: