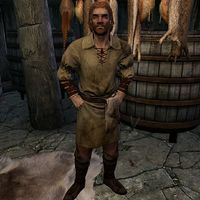 Thoring, a Nord food vendor, is the owner and proprietor of the Windpeak Inn. He is the father to the inn's bard, Karita. Thoring's wife died two years previously, and his daughter is concerned by the fact that her father is working too much.

He gets up at 8am, and from there immediately gets to work at the bar, only taking breaks to eat at noon and 8pm. After a long day, he finally goes to bed at midnight.

He wears a set of barkeep clothes and a pair of shoes. He is equipped with an iron dagger, and carries a key to the inn as well as a selection of common items and gold.

He seems pretty spacey and generally out of it, and often will remark: "I'm sorry. My mind was just somewhere else. Did you need a room? Drink?" and "Oh, do you need a room?" When the town is still infested with nightmares, he'll reassure you: "Need a room? Don't worry. Nightmares don't seem to happen for travelers." Sometimes he will also mention his daughter, saying: "My daughter Karita sings to the guests when she can. She has her mother's voice."

When asked about rumors, he'll warn you: "Everyone in town knows about the Black Door, and to never go near it." If Hail Sithis is complete he will then say: "Did you hear? People have been seen coming in and out of the Black Door. Divines have mercy."

When you first arrive at the inn, he and a few other Dawnstar residents can be seen asking Erandur about their nightmares:

Irgnir: "It's a curse! It has to be! I've got to get out of this town."
Fruki: "Irgnir, get a hold of yourself. They're just dreams. Please tell her, Erandur."
Erandur: "Listen to your friend, Fruki. They are just dreams, my dear. I assure you that it is quite normal."
Irgnir: "It's the same dream over and over again. You think that's normal? It's evil I tell you!"
Fruki: "Erandur, she has a point. You keep telling us no harm will follow these dreams, but they must be an omen."
Thoring: "Give him a chance to speak. He's trying to help us."
Erandur: "Everyone, please. I'm doing what I can to end these nightmares. In the meantime all I ask is you remain strong and put your trust in Lady Mara."
Irgnir: "I... I will. Thank you..."

During his work hours, he often talks with his daughter or his patrons:

Karita: "Father do you want to talk? About Mother?"
Thoring: "No, Karita. I don't think I could."
Karita: "I'm sure she would want you to be happy, father. Entertaining the guests and drinking and making your lewd jokes like before."
Thoring: "I'm sorry. I just don't feel up to entertaining anyone just now."

Karita: "I was wondering, father. Maybe you should take a day off and head into town. I could watch the inn while you're away."
Thoring: "Why would I do that? There's work to be done here."
Karita: "It'll do you good! Maybe you could visit Irgnir or Fruki on your way out? I've seen them looking at you when they come in for drinks...."
Thoring: "Why would they be looking at me? Are they upset about the service?"
Karita: "Oh, never mind."

Frida: "Thoring, do you remember the time when that wolf pack come clamoring into town?"
Thoring: "How could I forget? That old alpha male almost took off my leg."
Frida: "Never did find out why they came sprawling into town like that."
Thoring: "Animals in the Pale don't need a reason to attack Dawnstar. It's just their nature."

Frida: "Now, who was it that kidnapped the Jarl's son 20 years ago?"
Thoring: "You mean Hildolf the Skull-Splitter? Remember when we rounded up the townspeople and dragged him out of that cave?"
Frida: "Those were the days. I'd never seen my husband fight so bravely before."
Thoring: "Aye, to your husband. Divines bless his memory."