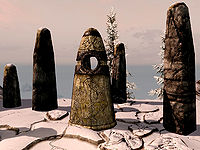 The Steed Stone is one of the thirteen Standing Stones scattered across Skyrim. 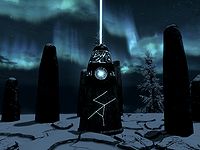 The Steed Stone, when activated 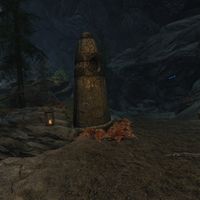 The Steed Stone in the Playroom (Skyrim VR)

It is located on top of a cliff to the northwest of Solitude, near Ironback Hideout.

Activating the Steed Stone will present this message: "Those under the sign of The Steed can carry more and do not suffer a movement penalty from armor."

Activating The Steed Stone will remove any Standing Stone effects previously obtained. It increases carry weight by 100 and removes movement penalty of armor. It also makes worn armor weigh nothing, making heavy armor a viable option for many character types.

The stone is found at the top of a couple of flights of stairs on a stone structure. It is near the highest point on the mountain. To reach the standing stone the best place to start is beside the northeastern tower of Fort Hraggstad and head just off of due east slightly south, taking a gap between two rock formations and then heading directly towards the stone and climbing a couple of snow covered banks. It is possible to travel from the standing stone to Ironback Hideout, but far harder to travel in the other direction due to the terrain. There are no ore veins or harvestable plants in the area around the standing stone.