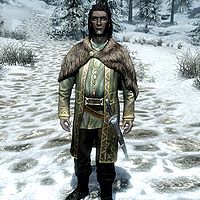 Plautis Carvain is an Imperial who traveled all the way from Cyrodiil to participate in the wedding between the emperor's cousin, Vittoria Vici, and Asgeir Snow-Shod, as seen in the Dark Brotherhood quest Bound Until Death. He can be randomly encountered twice in the wilderness, before and after the quest is completed.

He travels on foot accompanied by his nagging wife Salonia and a single bodyguard. Due to their lack of knowledge about Skyrim, they will never make it to the wedding in Solitude; instead they will end up inside the Temple of Talos in Windhelm, a long way from their destination. 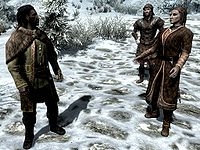 "Come along, no more stops, we need to find our way to Solitude." 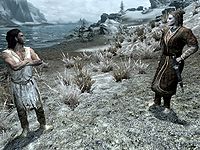 "We get robbed by bandits, my clothes torn to shreds by some giant cat, our bodyguard eaten by a dragon..."

When first encountered, Plautius' attire reflects his wealth, with fine clothes and matching fine boots. He carries a steel dagger and a selection of valuable gifts meant for the bride.

When approached, Plautis will reveal that he carries expensive gifts for the wedding and will act patronizing: "Don't bother me, peasant. I've had a long journey and paid too much coin on these gifts to be late to Vittoria's wedding." You can choose to wish him a good wedding, which will net you a bitter response: "Indeed. If we ever get there." You can also choose to state you will relieve him of the expensive gifts, which will make him panic: "What? No! Guard, help!", which will cause the bodyguard to attack right away. If you meet the travelers, you will overhear a discussion between husband and wife:

Plautis: "Come along, no more stops, we need to find our way to Solitude."
Salonia: "Why are we even going to a wedding at this far flung end of the Empire anyway?"
Plautis: "I told you, it's the wedding of Vittoria Vici, an extremely well connected merchant with the East Empire Company. The Emperor's cousin? Remember? Hopefully these gifts will put us in her good graces, secure that import deal, and lead the way to an audience with the Emperor."

After completing the quest, Plautis can be encountered again, although now in a miserable state. His higher-class attire has been stolen and he wears only ragged robes and footwraps and carries his steel dagger. When approached, he will be less patronizing than before: "Just get away from me. We've got nothing left to steal.", "I bet the wedding was amazing... and we missed the whole thing." and "Leave me alone. I just want to find my way out of this accursed province." Additionally, the bodyguard will no longer be present and Plautis and his wife will be on their own. Listening to their conversation reveals why:

Salonia: "I hate it here. Those were my favorite shoes, ruined and for what? We never even made it to the wedding."
Plautis: "Wha... Your shoes? We get robbed by bandits, my clothes torn to shreds by some giant cat, our bodyguard eaten by a dragon... And you're worried about your shoes?"
Salonia: "When we get back to Cyrodiil, I swear I will hire an army of battlemages to come up here and set fire to the whole damned province."