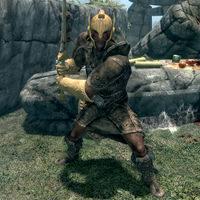 Kinthal is the gang leader of the Saints bandit group.

He can be found at his camp, just east of Karthwasten, up on a hill.