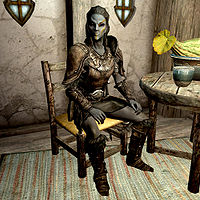 Jenassa, waiting for a contract

Jenassa is a Dark Elf ranger who can be found at a table at the Drunken Huntsman shop in Whiterun. Should you choose to pay her fee, Jenassa is available as a follower for 500 gold. As a ranger, Jenassa favors the use of bows, but will enter melee should the situation necessitate, and is also one of the few followers able to dual wield weapons.

Jenassa wears a set of leather armor with matching pairs of bracers and boots. She is equipped with an iron sword, an iron dagger, and a hunting bow supplemented with iron arrows.

It is possible for Jenassa to become a member of the Blades. She also becomes a potential candidate for marriage after being hired by you.

She has a general dislike of mines, saying they do not agree with her, and comments on how she prefers being above ground. She also dislikes the fact that the poor do the mining, but only the rich can afford what is found.

She responds to being healed by Restoration spells rather ungratefully, saying "I hope you're not expecting a thank you." She periodically makes comments about preferring to sneak up on her targets. She also makes several comments about the Dwemer, regarding them as the size of an average human while in Dwemer ruins. In Draugr crypts she'll comment: "I feel the eyes of angry spirits. We are not welcome, here.", "It is strange to think that these chambers were once home to the ancient Nords." and "Few would dare to trespass in these ruins. What you lack in wisdom, you make up for in courage."

This Skyrim-related article is a stub. You can help by expanding it.
Retrieved from "https://en.uesp.net/w/index.php?title=Skyrim:Jenassa&oldid=2481860"
Categories:
Hidden categories: