Elytra Nymphs are the juvenile forms of Elytra, which are large mantis-like creatures indigenous to much of the Shivering Isles. The two different breeds are marked by their distinct coloring, with the golden variants being native to Mania and the purple variants being native to Dementia. The Nymphs were added to Skyrim by the Saints & Seducers Creation. 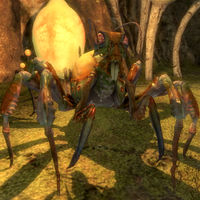 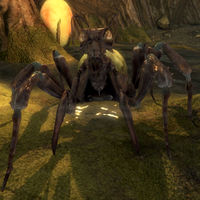 Hostile Elytra Nymph enemies can be found within the Solitude Sewers, a dungeon added once the Creation is installed. They drop Elytra Ichor. 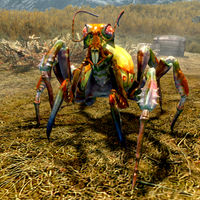 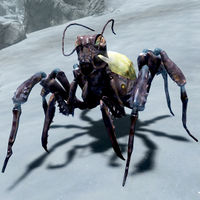 Two Elytra Nymphs that you may obtain as pets will be encountered during the Balance of Power quest, and there is one miscellaneous quest per pet. The Manic Elytra Nymph can be found in the first Saints Bandit camp, while the Demented Elytra Nymph can be found in the first Seducers Bandit camp. If you have either one following you for long enough, you will get a notification that the Nymph has Mystic Venom to harvest. The venom will replenish once every day for each nymph.