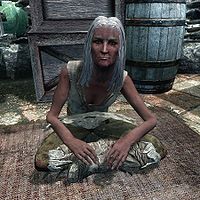 Edda is an Imperial beggar from Riften who, during the day, can be found near the market stalls, asking for septims. She sleeps in Beggar's Row between midnight and 7am.

Edda wears a beggar outfit consisting of ragged robes and ragged boots. She wields an iron dagger in combat and also carries some lower-class items and gold.

She may tell you that she is frustrated with her plights: "No one cares about us! No one! We could die and no one would ever know! They'd just throw our corpses in the canal.", "I can't take this place anymore. The trees... all the colors, but the city, so dark. Why? It makes no sense.", or "So cold, so hungry, so tired." She may also ask, "Are you scared of death? I am. I hear everything just stops... forever. It just all goes away, but you don't realize it. I don't want to die." or beg for some money: "Please, please. I need but a septim. A septim is all I ask. Is that so bad?"

As a beggar in Riften, Edda will try to get a septim or two from the townsfolk, and receive a unique response that reflects their personality: