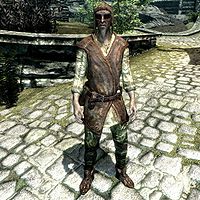 Dervenin wandering the streets of Solitude

Dervenin is a half-mad Bosmer beggar wandering the streets of Solitude mumbling to himself. He is distraught over being abandoned by his master and wants you to get him to take him back. He wears a set of common farm clothes, complete with boots and a hat, and carries an iron dagger as well as some upper-class items and gold.

When you first see him it is clear that he is desperate, as he can be found saying:

"Please, take pity on an old madman!"
"Who among you can help me?"
"Wait, hear my plea! My master, he is lost between worlds and I cannot bring him back!"
"Why does everyone ignore me? Why do you turn your heads? Why will no one help me?"
"The flame of my master burns low. Without him, we are all lost and forever gray... Please, help us!"

When talked to, Dervenin may also greet you with:

"You! You'll help me! You help people, right? That's what you do?"
What do you need?
"My master has abandoned me! Abandoned his people. And nothing I say can change his mind. Now he refuses to even see me. He says I interrupt his vacation! It's been so many years... Won't you please help?"

How can I find your master?
"Last I saw him, he was visiting a friend in the Blue Palace. But no one as mundane as the Jarl. No, no... such people are below him. No, he went into the forbidden wing of the palace, to speak with an old friend. Said it had been ages since they had last had tea. Oh and you'll need the hip bone... it's very important. No entering Pelagius' Wing without that."

Before you go to the palace, you may still ask him about who his master is:

Who is your master?
"He is a great man, but one rarely praised! He rules twin empires that span the length and breadth of our minds! All know him, but few can name him!" He will refuse to name his master however and will inform you of this by saying, "But... he has forbidden me from saying his name. He says it distracts him, and woe to those who draw his ire. But you will know him when you see him. He's the one who made me like this!"

Why do you need him back?
"Without his guidance, our homeland is falling apart. North wages war against south! The holy flame flickers and dies! We need his return. Oh, but... I'm sure he'll repay you when he comes to his senses! His favor is a powerful, powerful thing. And so very worth any... inconveniences."

How can I get to your master?
"He stays in the Pelagius Wing of the Blue Palace. The doors are locked, and only Falk Firebeard can grant entry. But I hear the maids, Una and Erdi, know how to enter it for cleaning. Surely they can help for such an important matter?"

When wandering the streets, Dervenin can be found in talking to himself, saying things like:

"Oh, master. It's your time to do with as you please, but what about those who depend on you so much?"
"Tendrils of thought may wind their way through this realm, but those tendrils bind our reality together."
"A method to your madness and your madness is the method and the melody..."
"I found the bone! I've brought it to you but still I am refused..."

As you find a way out of Pelagius' mind to convince Dervenin's master, Sheogorath, to go home, Dervenin will be summoned opposite him, elated about the return. Sheogorath, however, won't be as happy. The two will talk briefly before Sheogorath sends Dervenin back to the Shivering Isles. 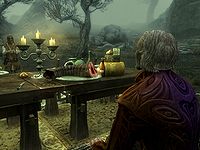