Skyrim: The Mind of Madness

While in Solitude, you may hear a rumor at the Inn about a mad beggar roaming the streets and ranting, or come across the beggar near the Bards College. Dervenin will be found walking in the streets, lamenting his missing master. Speak to him and he will complain that his master is neglecting his duties and that chaos will ensue. He says that his master is in the Pelagius Wing of the Blue Palace having tea with an old friend. He will tell you that you'll need "the hip bone" to enter, and give you Pelagius' Hip Bone.

Enter the Blue Palace and locate one of the cleaning staff. The key can be obtained from Erdi or Una by discussing the Pelagius Wing with her and telling her that Falk asked you to "look into it". You must pass an easy level, invisible Speech check to persuade her to give you the key. Alternatively, you can convince the castle steward to let you in if you have completed the quest The Man Who Cried Wolf.

If you lack the respective requirement, the final dialogue option will not appear; the NPC will simply exit dialogue.

Exploring briefly in the wing will show it in a state of disrepair. Further travel will require you to walk through some spider webs before you suddenly find yourself transported into a strange realm.

You will find yourself suddenly wearing a full set of Fine Clothes with your inventory inaccessible and your abilities removed. The scene before you appears to be an extravagant dinner set in the middle of a misty wood and surrounded by stone archways. Two people are sitting at the table, one wearing a distinctive outfit and sitting on a throne, and the other a depressed man. The latter is Pelagius III who is complaining of various woes, although he sounds strangely sane, which delights the man across from him. Pelagius will leave after a short conversation during which the other man tries to cheer him up. 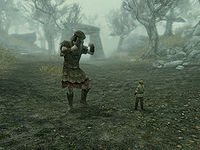 In this scene you will see Pelagius' Anger beating up Pelagius' Confidence. Confidence doesn't look like he is doing too well, since he is tiny and Anger is huge. Sheogorath wants you to tip the scales. Use the Wabbajack on Anger until he is tiny, and then on Confidence until he is as big as Anger was. You must act quickly, as Confidence will shrink every time Anger hits him. During the battle, two spectral figures labeled Self Doubt will appear and begin to spar with each other. They do not seem to serve any purpose other than to get in your way as you attempt to complete the trial. 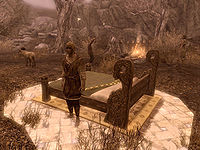 Pelagius with his converted night terrors in the background

You will see a bed in the middle of the forest with Pelagius sleeping on it. Sheogorath tells you that Pelagius has been suffering from night terrors since he was a child, and you are tasked with getting rid of them. Use the Wabbajack on Pelagius the Tormented to start the sequence, and then use it on each terror in turn as they arrive. After a successful attack with the Wabbajack each will turn into something more innocuous. Do not attack the innocuous creatures; instead, use the Wabbajack on Pelagius again to call the next terror. Repeat this process of zapping Pelagius and then the creatures that appear until he wakes up. Don't take too long in zapping the creatures after they appear, or you will have to start over. In order, the creatures or enemies that appear are:

After all of the terrors have been converted, everyone will convene around the bonfire, and Sheogorath will communicate with you and ask you to progress to the next area. 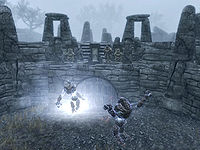 Through the Arch of Paranoia to the northwest is a small fort-like structure with steps leading up to the edge. In the middle of this structure there is an arena occupied by two fighting Storm Atronachs. Supposedly, one is yours and one is your opponent's, who is sitting opposite you with two other men. You are instructed to use Wabbajack to defeat your enemy. Don't bother zapping the atronachs themselves, as one will respond to the changes the other goes through, making the fight endless. Instead, aim for one of the two bodyguards sitting next to your opponent and Wabbajack them. Both of the men will turn into wolves and attack your opponent, killing him.

Go back to Sheogorath when you've finished his tasks and tell him you've fixed Pelagius' mind. He will summon Dervenin and return to the Shivering Isles, telling you to keep Wabbajack. He mentions his chamberlain, Haskill, as he prepares to depart, saying, "Well, I suppose it's back to the Shivering Isles. The trouble Haskill can get into while I'm gone simply boggles the mind..." You will then be transported back to the Pelagius Wing with all the items and powers you had when you started, as well as your new staff and clothes. Before leaving, move further down the hall and down the stairs to find a copy of the Lockpicking skill book Surfeit of Thieves.