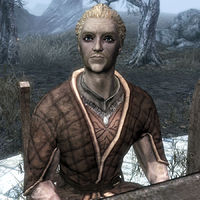 Pelagius the Mad, formerly Emperor Pelagius Septim III, is a Breton citizen and companion of Sheogorath in his realm. Though Pelagius has been deceased for centuries, during The Mind of Madness you enter his mind through the wing of the Blue Palace that has been named in his memory, namely the Pelagius Wing. Within, you are forced to observe a conversation between him and the Mad God Sheogorath, who is attempting to cheer him up. Following the conversation, Pelagius disappears.

Pelagius wears fine clothes and fine boots, but has no weapons or items.

Sheogorath: "More tea, Pelly my dear?"
Pelagius: "Oh, I couldn't. Goes right through me. Besides, I have so many things to do... So many undesirables to contend with. Naysayers. Buffoons. Detractors. Why, my headsman hasn't slept in three days!"
Sheogorath: "You are far too hard on yourself, my dear, sweet, homicidally insane Pelagius. What would the people do without you? Dance? Sing? Smile? Grow old? You are the best Septim that's ever ruled. Well, except for that Martin fellow, but he turned into a dragon god, and that's hardly sporting... You know, I was there for that whole sordid affair. Marvelous time! Butterflies, blood, a Fox, a severed head... Oh, and the cheese! To die for."
Pelagius: "Yes, yes, as you've said, countless times before..."
Sheogorath: "Hafrumph! Well then, if you're going to be like that... Perhaps it's best I take my leave. A good day to you sir. I said good day!"
Pelagius: "Yes, yes, go. Leave me to my ceaseless responsibilities and burdens..."