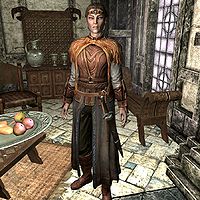 Bryling is a Nord warrior, a thane of Solitude, and the owner of Rockwallow Mine. She has a house in the city but spends most of her day in the Blue Palace. Very rarely, she can be found browsing the marketplace in Solitude. She is evidently having a secret tryst with Falk Firebeard, the steward of Solitude.

Bryling wears an upper-class outfit consisting of a fur-trimmed cloak, fine armguards, pleated shoes, and a copper and moonstone circlet. She wields a steel dagger and carries her house key and a selection of upper-class loot and gold.

She can be found in the Blue Palace for most of the day, from 8am to 8pm; eating lunch at 1pm and going to sleep at midnight.

Bryling may greet you by saying one of the following:

"Thane Bryling, at your service."

"I can always find time to share a word with a warrior."

Despite supporting the Empire, she respects the determination of the Stormcloaks.

"Many condemn the Stormcloaks, but I refuse. There is honor in fighting for what you believe."

She also comments on the war.

"This godsforsaken war is dividing our people and destroying our land."

When closing conversation, she may use one of the following lines:

"I'll get back to court business, then."

During the quest Payment Delivery, you can tell Bryling that you have a message from Pactur. She expresses concern, and upon hearing that they're fine, she thanks you for delivering the message.

Pactur asked me to deliver a message.
"Is everything all right? I've not heard from Sorli or Pactur in some time."
Everything is fine. The shipment will be here soon.
"That's good news. I was starting to fear something had happened.
You have my thanks."

Bryling can be found having conversations with members of the Court, including Falk Firebeard.

Bryling: "Falk, you shouldn't have come. You know what'd happen if people found out about us."
Falk Firebeard: "I know, my lady. I just needed to see you outside of court, away from all of the politics."
Bryling: "I'm serious. If Erikur knew about us, he'd force you to resign from your position. And without you, he'd have the Jarl bent around his little finger."
Falk Firebeard: "You're right, of course. But when this war is over, I'll gladly resign and we can stop sneaking around like this."
Bryling: "One more reason to pray for the fighting to end then, my love."

Bryling: "There's something that's been troubling me, Falk. I am hesitant to share it, but I feel that I must."
Falk Firebeard: "Speak your mind, Bryling. You're among friends here."
Bryling: "You know that I support the Empire, as we all do. However, I fear General Tullius is underestimating the Stormcloaks. Too often the general has lost good soldiers because he did not take Ulfric and his men seriously. If this continues, and the worst comes to pass, Solitude will pay the price. The Empire is headquartered here, after all."
Falk Firebeard: "We don't have the luxury of hanging back to see who wins before choosing our friends, Bryling. You know this. And besides, no Nord with a shred of honor would consider it. We're no cowards. Have faith, Bryling. When this war is over and Ulfric is dead, you'll see that you were jumping at shadows, and nothing more."

During her conversations with Falk, Sybille Stentor gets involved:

Falk Firebeard: "It's nearly time to collect taxes on your properties here in the city, Bryling. We'll need to visit each home for an assessment."
Bryling: "Is it that time again already? Very well, let's meet this evening and make the arrangements."
Sybille Stentor: "Oh, well done. Very subtle."
Bryling: "I beg your pardon?"
Sybille Stentor: "Oh, I'm sorry, did I imply that you'd be meeting for purposes other than court business? You must forgive me."
Falk Firebeard: "Hold your tongue, Wizard, or you're likely to lose it."
Sybille Stentor: "I should very much like to see you try it, my dear steward."
Bryling: "Stop it, both of you. You're acting like children."

She may also be overheard having some conversations with Irnskar Ironhand: