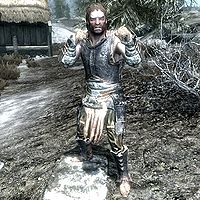 Benor is a Nord warrior living in Morthal. He claims to be an amazing fighter and is ready to prove it for a bet of 100 gold. If you defeat him, he can be recruited as a follower and will also be a potential candidate for marriage.

Benor has decided to help out the city watch, so he is allowed to sleep in the Guardhouse every night between 2am and 9am. He then spends nearly all of his time patrolling the town. After waking up, he spends two hours guarding the Guardhouse by standing on the porch outside then heads down to the bridge that leads to the sawmill. When the clock strikes noon, he spends two hours investigating the mysterious burned-down house in the western part of town. At 2pm he returns to the bridge and at 5pm he heads back to the porch. At 7pm he finally relaxes and heads to the Moorside Inn where he stays until midnight when he heads back to the Guardhouse and paces around until his bedtime.

He wears iron armor with matching boots and gauntlets. He wields an iron battleaxe and carries a selection of middle-class items and gold.

If you dare question him if he really is the best warrior in town:

Best warrior in Morthal, huh?
"Want me to prove it? I bet a hundred gold I can take you, bare-handed."

I've got better things to do.

Should you accept his bet without 100 gold in your possession:

"Come back when you have the coin."

When you have defeated him in hand-to-hand, he will get up and say:

When he hands you the prize, he will admit:

"You're a real fighter. I like that. You ever need my steel by your side, you just ask."

"Morthal used to be a quiet place. But then, the world used to make sense."
"I figure the guards could always use some help, so I keep my eyes open."
"Been hoping they'd make me a guard, but not yet. Still, I'll help them out if I can."
"The Jarl does little to protect us these days."
"You ask me, we'd be better off without that wizard in town."
"This isn't the time or place for magic, or whatever it is Falion does."

If you talk to him directly, he will claim:

"I'm the best warrior in Morthal, and that's no boast."
What is it you do here in town?
"Oh, well. You know. A bit of this, a bit of that. They haven't made me a guard, even though I've been asking. So I'll take odd jobs, anything that comes along for now."

When Benor visits the Moorside Inn, he will often hook up with his good friend Gorm and speak secretly about their dissatisfaction with the Jarl:

Like most other men in Morthal, Benor will also occasionally be hit on by the sultry Alva:

Alva: "I'm bored, Benor. Nobody wants to have any fun with me."
Benor: "If you leave that kinslayer Hroggar, I would be happy to keep your company."
Alva: "Hroggar doesn't have to know if we sit together. Or drink together. I doubt he would even care."
Benor: "You tempt me mightily, Alva. But I won't cuckhold [sic] another man, even on [sic] murderer like Hroggar."