The UESPWiki – Your source for The Elder Scrolls since 1995
< Online: Quests: Khenarthi's Roost / Side Quests
Jump to: navigation, search

A moon-sugar plantation suffered a terrible fire. The family in charge of the plantation needs a hand to recover from their tragedy.

When you arrive at the Speckled Shell Plantation, you may notice that several of the buildings are now smoking wrecks. If you want to help out you can either speak with Officer Lorin as she investigates the plantation or with Azbi-ra in her home. If you speak with the former, Officer Lorin will immediately question you about your identity before directing you to Azbi-ra.

"Do you work here? Are you a field hand?"
No, I don't work here.
"You're from the shipwreck, then? Watch your step, a fire hit this plantation and set the skeevers on edge.
Shame about Azbi-ra. Seems her father burned himself in the fire."
Who is Azbi-ra?
"Azbi-ra runs the plantation with her father. She didn't have much to tell me.
Maybe she'll be forthcoming with someone who isn't a Thalmor inspector. If this was arson, I'll need to know."
I'll talk to Azbi-ra.
"I should get back to my investigation. If you find anything, I'll be around." 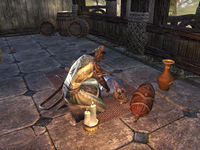 "Hush, father. I won't leave your side."

You can then speak with Azbi-ra who is in the house to the northwest of the plantation. She can be found tending to her unconscious father, Yanalir who was injured during the fire. Her dialogue will differ depending on whether you were sent by Officer Lorin or you came at your own volition. She will explain what happened recently and will have a request.

She wants you to see if any of their alchemical equipment survived the fires, so she trade them for medicine. Before you leave you can ask her about the plantation's crops and her missing brother, as well as read Zaban-ma's Journal which may provide some insight into the current situation. 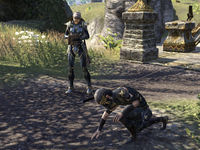 Officer Lorin has taken an interest in the fire

To reach plantation proper, just follow the road from the house east until you cross the bridge, the three burnt out sheds can be found on the southern and eastern side of the plantation. Officer Lorin and a Dominion Soldier can be found on the other side of the bridge, inspecting the plantation. You have the option of introducing yourself if you have not spoken with her previously. Otherwise you can report back what Abzi-ra asked you to find.

Officer Lorin can be further questioned about the Aldmeri Dominion and the Thalmor's presence on the island. Continue down the path to the first of the storehouses, you may be attacked by the aggressive Skeevers which became agitated after the fire for some reason.

In the first storehouse Smouldering Alchemical Tools can be found:

<The fire completely ruined the alchemical tools in this storehouse.>

The second storehouse is next door, along the way you may find a threatening letter and has a Scorched Workbench inside, which is covered in melted glass:

<Melted glass coats the workbench, but you find nothing to salvage.>

The third storehouse is on the eastern side of the plantation, it is filled with smoke and has a Charred Workbench.

<You find nothing to salvage on this charred workbench.>

Nearby to the storehouse, you can find the a note which talks about distilling moon-sugar and the results after feeding it to a skeever. 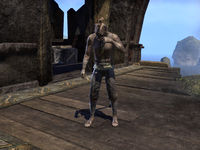 Once you checked all three storehouses and fail to find usable equipment, an angry voice will call out to you from outside.

Head out the door and meet Zaban-ma, the brother which Azbi-ra said was missing. Question him to see what he knows about the fire—it turns out that it is a lot.

"If you plan to loot my family's plantation, I will give you such a thrashing!"
Azbi-ra asked me to look for alchemical tools.
"Too late, sugar-thief. The fire destroyed every last calcinator.
Wait, I expected my sister to check on the tools herself. Why did she send a stranger?"
She's with your father. He was gravely injured in the fire.
"You lie! My father left yesterday to trade in Mistral. Didn't he?
Oh, no. I set the fires to destroy those damned tools, not to hurt anyone. Not to hurt my father!"
Why would you burn your family's plantation?
"We lost our last harvest to the thunderbugs. Despite the debt, Azbi-ra bought alchemical tools. To improve our crop, she said.
But last week I caught her brewing skooma. That vile drug destroys lives! When she refused to stop I knew what must be done."

He can be ask about his truthfulness and his reasons for the fire, but he will repeatably refer back to his sister burying something at the nearby beach which he believes is the skooma.

How do I know you're telling the truth?

"My sister despises sand under her claws, but recently I saw her digging out on the beach. Why else would she be out there, if not to bury skooma?
I should go to my father. Would you look for any skooma hidden on the beach?"

Why burn everything to destroy the tools?

"I don't want my family imprisoned. The fire was to destroy any trace of skooma.
Recently I saw my sister bury something on the beach. I was headed there next, but I should be with my father. Would you search for the skooma she hid on the beach?"

All options lead to you volunteering to recover the skooma so he can destroy it.

If I bring back skooma, what will you do with it?

"I'll destroy it. With the money we spend to rebuild, it will be like the skooma never happened. I'd rather debt collectors pound at our door than skooma dealers.
Damn my eyes. Father should've been in Mistral!"

I'll go look for the buried skooma. (This option advances the quest)

"My sister placed colorful seashells near whatever she buried. I bet there is a sack full of skooma vials next to them.
I'll be with my father. If you find anything, bring it back to me."
I'll bring any skooma I find to you. 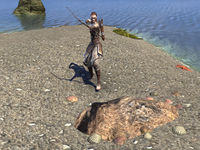 When I recovered the skooma from the beach, I was attacked by a Crosstree Bandit

You can asked Zaban-ma about skooma and his sister before you leave. While you go beachcoming for skooma, he will return home to check on his father. If you decide to follow, you will find that Yannalir's condition has gotten worse. The beach that Zaban-ma was talking about is the northeast of the plantation, and the spot will be marked a stack of sea shells. Once you begin to dig in that location you will be interrupted by an unwelcome arrival:

Once you deal with her, you can take the Sack of Skooma Vials with you and return to Zaban-ma at his home.

The Lorin Arm of the Law[edit]

However, when you approach the house, Officer Lorin will call out to you.

Officer Lorin: "You there, come here."

She will be waiting for you behind the house, in the background Zaban-ma and Azbi-ra will be mourning next to a freshly dug grave. Officer Lorin has completed her investigation and is suspicious of everyone involved—including you.

I work for myself, and I'm not running skooma.
"That farmer shook himself to death. You think I don't recognize a skooma overdose when I see one? That I don't know why skeevers are frothing at the mouth?
I should arrest the lot of you." 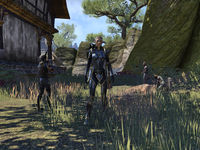 Decide the Fate of the Family

At this point you have a couple of options; you can admit you found a bag of skooma on the beach, stall for time by asking to speak the siblings, or lie outright.

If you decide to had the sack over:

Wait. I found this skooma on the beach.
"That's a lot of skooma. I had my doubts, but I'm glad you came to your senses.
Now, what should I do with you? What else are you hiding?"
A Crosstree bandit tried to take the skooma.

"Explains why Crosstree Bandits popped up all around the island. If they're running more and more skooma, they'll approach farmers to brew it directly. That kind of short-sighted greed is what leads to situations like this."

I found this on the beach. I did nothing wrong.

"I'm not sure I believe you.
You're lucky Inspector Tarma is busy with Laughing Moons Plantation. He doesn't have a lenient bone in his body."
So what happens to me now?
"That sack of skooma bought your freedom, and a reward for your cooperation.
Now, stand aside. I've got business with these Khajiit."

This will complete the quest and you will receive some gold and the Sugar Jacket. After you proved your innocence by handing the sack over, she will arrest Zaban-ma:

Officer Lorin: "Get up, scum. This is what you get for brewing skooma. It's a long walk to Mistral. Don't try anything stupid."
Zaban-ma: "This one understands."
Officer Lorin: "Soldier, keep watch. Head to Mistral in the morning."

If you ask for a chance to talk to the siblings:

Let me speak with the family. I'll prove I'm not involved.
"Buying time to get your stories straight?
Go ahead, I'll be right over here. One warning - my ears are as sharp as my dagger. I'll prove it to you if you even try to whisper."

When you speak with Zaban-ma he will mention that Lorin claimed they found evidence of skooma in the storehouses but realizes that she is currently bluffing without further evidence.

"My father is dead, and now this Dominion outsider wants to throw me in prison!
They say they found evidence of skooma in the storehouses, but that's impossible!"
I found what was buried under those shells.
"Then Officer Lorin found nothing in the storehouses but suspicion. She's bluffing.
What will you tell her?"
I'll do what I believe is right.
"What's right is allowing us to recover from tragedy, not suffer more of it.
Please. Make this right."

After this you can speak with Officer Lorin who will be impatient and you have the same set of replies as before.

If you decide to lie about finding anything:

You will be given a second chance to hand the skooma over, otherwise you can appeal to Officer Lorin's emotions and convince her to leave them alone.

[Lie] I don't know what you're talking about.
"Last chance. If someone doesn't tell me where the skooma is, you'll all face the consequences."
These Khajiit lost their father. Why are you harassing them?
"Yes, well … it's my job to ask questions. Perhaps moon-sugar fumes can cause the skooma shakes. Maybe I see skooma where it isn't, sometimes.
I'll leave them to their grief."

She will then take her leave after ordering the accompanying soldier:

Officer Lorin: "Soldier, look after these people. Once they're settled, report back to Mistral. 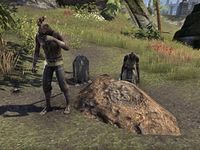 You can then hand the bag of skooma over to Zaban-ma.

"Thank you. S'rendarr himself would commend your actions.
Give me the skooma so I can destroy it. I want to finish what I started."
Here's the skooma.
"Thank you. I'll destroy this immediately.
My sister is all I have left. We'll learn to forgive each other. We have to, if we are going to rebuild."

This will complete the quest and you will receive some gold and the Sugar Jacket.

Once you receive your reward, he will put the bottles of skooma on the ground and start stamping on them:

Zaban-ma: "This poison causes nothing but pain!"

He then walks over to Azbi-ra.

There is one achievement associated with this quest: