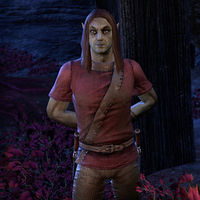 Tervur Sadri is a Dark Elf found in Darkshade Caverns I. He sends you to look for his partner Selos, but Selos' daughter reveals that he murdered Selos and stole the deed while also double-crossing the thugs that took over the mine.

After a confrontation with Nervyna, he will flee and be found hiding behind the Sentinel of Rkugamz, where he can be attacked to retrieve the Deed.

He can be found standing in the first chamber of the mine caverns, where he will convince you to help him clear out the mine from ne'er-do-wells.

"You're supposed to be in the...
Wait? Who are you?"
What are you doing?
"My kwarma mine's been taken over by thugs! They're tearing the place up—ruining it.
Worse, I can't find my partner, Selos."
Do you need help?
"I don't see how I can get through to Selos without help. He's probably at the bottom of the mine, beyond all these invaders.
We're going to have to cut our way through. If we kill the thugs' leaders, they'll probably run for it."
Then let's kill the thugs' leaders.

Speaking to him further:

"What's the delay?"
Where are the regular mine workers?
"These blasted thugs came in and ran them off.
If they smash the equipment or the eggs, we'll be ruined."

Why would they come in and smash up your mine?
"They seem to think this is a gold mine, and we're hiding untold wealth somewhere down inside.
It's madness—I can't imagine where they got such an idea."

Does that mean you'll be paying me in kwama eggs instead of gold?
"Oh, no, I'll make it worth your while. Old Selos' has got a pile of real gold down there somewhere—he's sold a lot of these eggs. You'll be paid, right enough.
Now, let's go and save him."

Who's occupying the mine now?
"A gang of mining thugs from the mountains who call themselves the Pit Rats.
They're bandits, really—scum who raid mines and take whatever they can loot."

What brough them to Darkshade caverns?
"How should I know?
Though I did overhear something about how they think there's gold down there. Idiots."

If you try to talk to him while he is a follower, he will say,

"Sorry, I'm busy. Don't have time to be bothered."

After fighting your way through Pit Rats who say various incriminating things about Tervur Sadri. When you reach the harvest cavern, Tervur will examine the Kwama Eggs on the top level.

(He will then become non-interactive.)

Once the Pit Rats are killed,Tervur will call out to you. 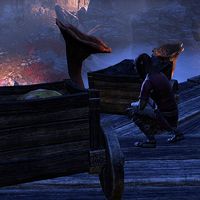 Tervur Sadri: "Good. But you're not done yet."
<Foreman Llothman walks into the room.>
Foreman Llothan: "Cowards the lot of you! This mine belongs to House Selos. You are intruders, and will be disciplined as such!"

When Foreman Llothan is killed, Tervur will jump down and start inspecting the damage before he starts gloating at you for helping him.

Once the Sentinel of Rkugamz is dead, Tervur can be found trying to get through the door.

Once you attack him, he will yell and throw himself at you.

Tervur Sadri: "You want me? Come and get me."

This Elder Scrolls Online-related article is a stub. You can help by expanding it.
Retrieved from "https://en.uesp.net/w/index.php?title=Online:Tervur_Sadri&oldid=2651706"
Categories:
Hidden categories: