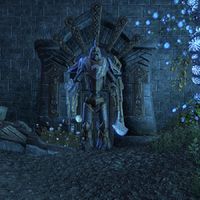 The Sentinel of Rkugamz is a Dwarven centurion found in Darkshade Caverns I. It serves as the third and final boss, and it must be defeated to complete the dungeon. It has a chance to drop the Imperial Arm-Cleaver or the Imperial Warhammer.

As a boss type enemy, the Sentinel of Rkugamz is immune to all forms of crowd control effects.