The UESPWiki – Your source for The Elder Scrolls since 1995
< Elder Scrolls Online: Quests: Deshaan / Side Quests
Jump to: navigation, search

Tervur Sadri, the co-owner of the Darkshade mine, wants me to help him find his partner, Selos, and get rid of the thugs who've displaced his miners.

When you enter the mine, Tervur Sadri is standing next to one of the carts at the entrance to the mine. He claims he's the co-owner of the mine, and that thugs have taken over the operation. He needs to enter the mine to find his partner, Selos, but he's no good in a fight. He asks you to escort him through the mines, promising gold. The taskmasters are the leaders of the thugs. You'll want to kill them first.

You need to kill Taskmaster Anaba, Taskmaster Ninbael, and Taskmaster Elitai. Tervur will join you, although he is not very skilled at fighting. Follow the path, and you will run into the three taskmasters.

After you kill Taskmaster Elitai, the last taskmaster, you will need to clear the Harvest Room. The Harvest Room is the large area in the northeastern part of the map. You can get to the lower level by following the wooden path, or you can choose to attack from above. 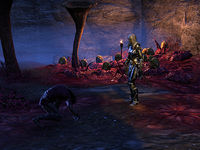 Once the enemies in the Harvest Room are defeated, Foreman Llothan will walk out from the door. Defeat him. As Tervur is checking for damage, Nervyna Selos will jump down and accost him, calling him a murderer. Tervur Sadri says some incriminating things before disappearing.

You continue deeper into the mine, fighting enemies like the Hive Lord and dwarven spheres on your way to Tervur. Tervur is hiding by a door behind the Sentinel of Rkugamz. Kill the sentinel and loot the deed from his body. Afterwards, talk to Nervyna for your reward.