The UESPWiki – Your source for The Elder Scrolls since 1995
< Online: Places: Western Skyrim
Jump to: navigation, search

There are several landmarks from TES V: Skyrim that have been recreated in ESO: Greymoor, but are not normally accessible. They are shown on the map, but not named in-game, so they are listed here by their names from TES V. 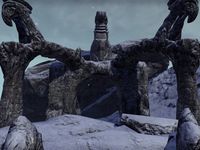 Skyborn Altar is a mountain peak east of Labyrinthian. It consists of a central altar structure and some separate pieces of stonework. These pieces can sometimes be seen from the road crossing Hjaalmarch from west to east.

Eldersblood Peak is a mountain peak west of Labyrinthian. Only a few stone pillars and pieces of stonework are modelled here. They can also be seen from the road below.

Deep Folk Crossing is a small Dwarven bridge over a western tributary of the Karth River, upstream from Karthald Great Lift. 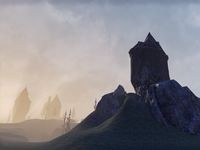 Bleakwind Bluff, with the twin Sundered Towers (visited during The Blood of Old Karth) in the background

Bleakwind Bluff is a tower far south of Karthwatch, which can be seen from the the nearby hilltop (near the Red Eagle Tower).