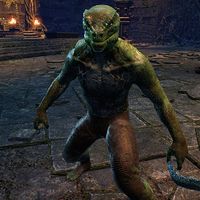 Ojei is one of the surviving Argonian subjects of Ree-Nakal's experiments on defective eggs. Unlike many of his Hollow siblings, his body did not break down rapidly and his mottled green skin is unusual. He can be found in the Worship Chamber of the Blight Bog Sump along with some Veeskhleel Alchemists, who will throw poisons at you in combat.

Ojei, unlike his brother, has no special abilities, and mostly attacks with his claws. The Veeskhleel Alchemists in the room are the ones you really have to look out for with their thrown poison.

Slash
Ojei slashes at you with his claws

This Online-related article is a stub. You can help by expanding it.
Retrieved from "https://en.uesp.net/w/index.php?title=Online:Ojei&oldid=1960246"
Categories:
Hidden categories: