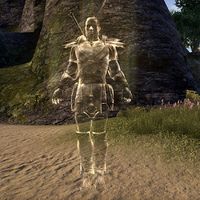 The ghost of Jofnir Iceblade

Jofnir Iceblade was a Nord warrior and the former guildmaster of the Fighters Guild before Sees-All-Colors. He kept quarters in Vulkwasten, Sentinel, and Fort Amol.

As you approach the place Merric at-Aswala was taken to, his ghost will appear and call to you.

Jofnir Iceblade: "Comrade, to me!"

When approached, he will hail you again.

"Comrade."
Who are you?
"I am Jofnir Iceblade. Former master of the Fighters Guild. Don't interrupt, I cannot speak long. Doshia has taken Merric beneath the island, into the vault. She drains his soul for her master's dark plans."
Why are you here?
"I can't … I can't say. My time grows short. Save Merric, stop the Daedra. Ware the followers of Molag Bal …."

After revealing this information, Jofnir disappears.

Jofnir Iceblade: "Wait for her to leave. I must speak with you."
Jofnir Iceblade: "Please. Speak with me."
"I only have a moment to talk."
Why do you keep appearing to me?
"You're in danger. Danger I can't fully comprehend, not even in death."
What kind of danger? Why can't we talk about this danger?
"Someone close to you has plans... plans for us both. Plans to betray you.
I am anchored, contained ...pulled away... beware, comrade!"
I will.

After delivering this warning, Jofnir disappears once again.

Inside Ragnthar, Jofnir's remains are guarded by wards. After you recover the insignia, Aelif will identify him and perform a spell to speak to him in order to see who his killer was:

When you and Aelif return to the Earth Forge, she will prepare to summon Jofnir to make him tell her where Sees-All-Colors has gone.

Aelif: "Let us summon our old friend. He will know where his murderer hides."
Jofnir Iceblade: "Damn it, cat! Can't you let an old ghost be at peace?"
Aelif: "Not just yet, old Nord. Aelif has one more question for you. Where is Sees-All-Colors? Where does she hide?"
Jofnir Iceblade: "You know I can't … I can't tell you. He holds me bound."
Aelif: "Tell Aelif, or she will show you what it means to be bound!"
Jofnir Iceblade: "Ah! She … she sought out the Mortuum Vivicus! It's … it's in the Halls of Submission! Don't go comrades, she's …."
<Jofnir disappears before he can finish.>
Aelif: "Enough! Aelif is up to the challenge. But don't worry, Jofnir. She will let Molag Bal know how helpful you've been."
<Aelif will then open a portal and Merric will follow her through.>
Merric at-Aswala: "The weapon is ready, comrade. Take it from the anvil, and follow us into battle!"

After you find and confront Sees-All-Colors, Aelif will reveal her true allegiance to Molag Bal and will attempt to kill you. However, once she is dead Jofnir will be freed so he can appear before you.

"Comrade, you've done it. I am free. Free from Ragnthar's barrier, and that dark cat's shackles."
Why are you here, Jofnir?
"I am here to keep you safe, comrade. And to help you see this task done. You must destroy this abomination, this Mortuum Vivicus."
What should I do?
"Throw the weapon into the center of the construct. Molag Bal's dark plot will be at an end! Don't be afraid … I will keep you safe, my comrade."
I'll see it done.

Once you throw the Prismatic Weapon into the Mortuum Vivicus, it will be destroyed:

When you arrive back in the Earth Forge, the council will be waiting for you. You will need to speak with Jofnir before reporting to Countess Hakruba:

"You've done well, my friend. The Mortuum Vivicus is destroyed."
Thank you for your help, Jofnir.
"It has been an honor to save the guild I served in life. Now, the council has assembled. You should speak to them. Unless Hakruba has changed a great deal since my death, she won't like to be kept waiting."

After you have reported to the council and witnessed Merric being made the new Guildmaster, Jofnir will appear to you for a final time after you leave the Earth Forge and return to the Guildhall you left.

"This great time of unrest within the Guild is at an end. You've done very well, comrade."
Jofnir. What are you doing here?
"I am bound for Sovngarde and the halls of Ysgramor. But before I take my leave, I would make for you a gift. The Prismatic Weapon. I retrieved it from where it had fallen after the Mortuum Vivicus was destroyed."
I'm honored, Jofnir.
"You are a true hero of the Guild, comrade. You deserve nothing less. What's more, consuming the Vivicus has unmade the weapon. It is once again in its primal form. I can return it to your hand in any shape you desire. What do you say, comrade?"

I wield a longsword.
I'm best with a bow.
A staff, if you please.
I'll take a greatsword, Jofnir.
"Comrade. I grow … very tired. My time here on Tamriel has gone on far too long. I go now to join my ancestors, to feast in the halls of those gone by. I go knowing that the Fighters Guild is in very good hands."

This Elder Scrolls Online-related article is a stub. You can help by expanding it.
Retrieved from "https://en.uesp.net/w/index.php?title=Online:Jofnir_Iceblade&oldid=2247162"
Categories:
Hidden categories: