The UESPWiki – Your source for The Elder Scrolls since 1995
< Online: Quests: Reaper's March / Side Quests
Jump to: navigation, search
The rumor around town is that Kalari's new house is haunted.

"Go, go. Kalari should not have to deal with her father's legacy alone."

What do you know of her problem?

"Apparently her house is haunted. She's Ezzag's niece, so normally I'd be suspicious. Shiftless family ties, you know? But she's a good sort. Never known her to lie, and a sweet lass to boot."

I'll tell her you're thinking about her.

You need to go east to talk to Kalari. She is standing outside her house.

"Don't worry about Kalari, stranger. Just mulling what she should do next."

Can I help? Someone said something about ghosts?

"Kalari is not even sure they are ghosts. She doesn't know what they are. I inherited this house from my uncle Enak-do. He passed away not too long ago. When my brother Mathal and I tried to move in ... bah!"

"It's bad enough that these apparitions keep appearing and disappearing all over the house. But every busybody in S'ren-ja is trying to help Kalari! As if she was some kind of fragile flower. Dark moons!"

Can I go inside and take a look?

"Be careful in there. Whatever they are, get too close to them and they'll send you flying. Kalari found that out the hard way."

You can ask her more about her uncle, the ghosts, and her brother, or you can go inside and start your investigation. She thinks Enak-do willed her the house because he treated her like his own cub; they were close. Ezzag is her only other family member in town. The ghosts began showing up almost immediately after her uncle's death, but no one has died in the house and she doesn't recognize any of the ghosts. Enact didn't even die in the house; he died on the road to Dune. If you ask her about her brother, she says he is a troublemaker and she has barely seen him since they inherited the house.

Now it is time to search the house. There are two ghosts in the first room. They start to glow green when you pass them, then turn red. When they are red it is best to avoid them, if possible, as they can knock you back, which does no damage to you. Read Pay Up, Enak in the crate to the right when you enter.

Continue upstairs. There are ghosts on the stairs, so be sure to be quick or time when you walk past. The first wardrobe on the right takes you to a hidden room when you search it. Read For Mathal, a letter on the desk. It appears that Enak was in debt to Rakhad and took the trip to Dune to pay off the debt. He asked Mathal to convince Kalari that the house was haunted, so Mathal could sell it, pay off the debt, and she would never have to know.

Return to Kalari outside.

"Did you get any of those ghosts to talk? What did you find?"

I found a letter from Enak-do to your brother.

"What? Let Kalari see that. Mathal and Enak were running skooma? And for Rakhad, of all people. Shuzura's old assistant. Dark moons and dull claws!"

What does this have to do with the ghosts? 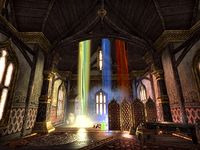 Rakhad's house is the next house over from Kalari's, to the northwest. Enter, and you see a Khajiit lying on the floor surrounded by green crystals emitting blue, red and yellow light. You can read Simple Illusion Magic on the nightstand to the right to figure out how to solve this puzzle. You need to activate the three crystals until you hear a sound and the light stops. The first one (center and closest to the entrance) should be orange, the left one green and the right one should be purple. Press the center twice, and the left and right ones once to get this combination.

Read the note, Letter from Rakhad, on the desk in the second half of the room. Rakhad was threatening to "convince" Kalari to sell the house.

Return to Kalari. Tell her she was right about the ghosts, then you can tell her the truth about Mathal or lie and say he ran away. You show her the letter as proof, and she asks you to return to Clanmother Shuzura and tell her what you did for S'ren-ja. But first she thanks you for helping her family and gives you a reward.

This Online-related article is a stub. You can help by expanding it.
Retrieved from "https://en.uesp.net/w/index.php?title=Online:Haunting_of_Kalari&oldid=2040691"
Categories:
Hidden categories: