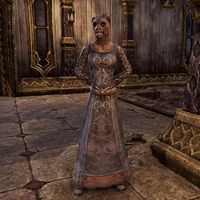 Kalari is a Khajiit found in the town of S'ren-ja. After saving the town, she can be found on the porch of the Clanmother's House in the company of Milk Eyes.

If you help S'ren-ja before arriving in Dune, she'll be there to greet you: "S'ren-ja salutes you, walker."

"Don't worry about Kalari. Just mulling what she should do next."

Can I help? Someone said something about ghosts?
"Kalari is not even sure they are ghosts. She doesn't know what they are.
I inherited this house from my uncle Enak-do. He passed away not too long ago. When my brother Mathal and I tried to move in … bah!"
You seem very frustrated.
"It's bad enough that these apparitions keep appearing and disappearing all over the house. But every busybody in S'ren-ja keeps trying to help Kalari! As if she was some kind of fragile flower. Dark moons!"
Can I go inside and take a look?
"Be careful in there. Whatever they are, get too close to them and they'll send you flying. Kalari found that out the hard way."
Why did your uncle leave you his house?

"Uncle Enak and I were always close, I suppose? Kalari's father died when she was a cub, and after he treated me like a daughter.
His only other family in town is my other uncle, Ezzag. He already has a farm on the edge of town."

Can you tell me anything else about these ghosts?

"They began showing up almost immediately after uncle died. Very strange.
Kalari does not recognize any of their faces, and as far as she knows no one has died in the house. Uncle passed away while on a trip to Dune."

Where's your brother? Why isn't he helping you?

"Oh, Mathal is probably off getting into trouble. Again. After our father passed away my uncles Enak-do and Ezzag tried to teach him right from wrong. He would never listen.
Kalari has barely seen him since we inherited the house."

Investigate and speak to her again:

"Did you get any of those ghosts to talk? What did you find?"
I found a letter from Enak-do to your brother.
"What? Let Kalari see that. Mathal and Enak were running skooma?
And for Rakhad, of all people. Shuzura's old assistant. Dark moons and dull claws!"
What does this have to do with the ghosts?
"Kalari does not know … but wait. Right here in the letter, uncle says to 'get Kalari out of the house.' And he even says 'make her think it is haunted, or something.'
Mathal, moons bless him, is not very creative. Could he be behind the ghosts?"
Where is Mathal now?
"Rakhad's house. That's where he has to be. She kept seeing him near that well, wandering about. Kalari thought he was just being lazy, drinking water.
To do this magic, or whatever it is, he would need a private place. That must be it."
Stay here, I'll check out Rakhad's old house.
"Go! Mathal is … damn it. He's so stupid. But he is all Kalari has. Parents dead, uncle Enak-do dead. Ezzag old and angry.
Do not let Kalari's brother do something so stupid."

After investigating Rakhad's House, return to her again:

"What happened? Was Mathal in Rakhad's house?"
We were right. Mathal was behind the ghosts. They were illusions meant to scare you off.
"Illusions? Kalari supposes that makes sense. Mathal was always learning little tricks, little … but where is he? Where is Mathal?"
I'm sorry, Kalari. Mathal is dead. The illusion ritual killed him.

"No! Damn it Mathal, you stupid stupid Khajiit. Why would he do this to himself? Why would he do this to me?"
I found this letter from Rakhad to Mathal, threatening your life.
"Let Kalari read that … so Rakhad threatens my life directly, and Mathal thinks to save me through fear. The typical thinking of a stupid, stupid brother.
He died for Kalari, that idiot. Such a waste …."
Is there anything else I can do for you?
"No, Kalari would like some time alone to think now. You have done so much for her. You should go speak to the Clan Mother.
Tell her of all you have done for S'ren-ja."
I'm heading back to her next.
"Thank you, for all that you have done. May bright moons light your path … as they have not done for my family."
"Kalari will be all right, you will see. Just needs some time to deal with what has happened.
Go, speak to Shuzura. She will want to hear from you."
I'll go speak to Clan Mother Shuzura.
"Good. I'm sure she'll want to thank you for everything you've done for the village. Bright moons."
I'll be on my way then.

[Lie] I'm sorry, Kalari. Mathal is gone. He's run away to spare you.

"I wanted to say thank you again."

This Online-related article is a stub. You can help by expanding it.
Retrieved from "https://en.uesp.net/w/index.php?title=Online:Kalari&oldid=2201990"
Categories:
Hidden categories: