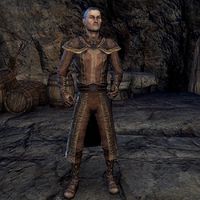 Gerard Althen is a Breton hiding in the Sanguine Barrows.

He previously worked for King Ranser as his spymaster. During Ranser's War, he was tasked with interrogating every Orc found in Rivenspire. If any proved to be suspicious, he was ordered to have them executed. He is being tracked down by the Ring of Daggers for the war crimes he has committed.

After offering to help Marisette, you can find Althen hiding inside the Sanguine Barrows Crypt. He's barricaded himself inside and refuses to come out, opting to speak through the stone door.

"Who's out there? Turenn? Tell me that's you."
Open the door, Althen.
"For you? I don't think so. Who do you work for? The Ring of Daggers?
If so, you're wasting your time. You can't get in, and I have enough supplies to survive in here for quite some time … however long it takes until my friends come for me."
Your friend Turenn was killed by the trolls.
"Turenn is dead? You saw him? Oh gods!
I—I needed him to get me out! The door can only be opened from the outside. I don't have enough supplies to last forever! I'll die in here!"
I can open the door if you'll tell me how.
"Of course you will. And then you'll hand me over to the Ring of Daggers! I'm no fool.
I am in a bind here, though. Perhaps I can persuade you to have mercy. You should know that despite my past, I'm actually a very good person now."
You expect me to take your word for that?
"Well … no. There's a letter in my pack, though! It would give me some credibility.
I dropped my pack out in the barrows, but if you'll find and read that letter, I'll tell you how to open the door. And if you still want to turn me in, so be it."
That sounds reasonable.
"All right. I believe I dropped my pack by an altar just north of the crypt. You'll find the letter in there.
If you read it, you'll see! I'm a changed man. I've done everything I can to make amends. Please, just read it and come back."

If you try to speak to him before finding his pack, he'll say:

Return after finding the letter:

"You're back? Thank the gods! The walls of this crypt are closing in on me now. Ever since I realized I might die in here. Funny how the mind does that.
Did you find my pack though? Did you find the letter?"
Yes. I read the letter.
"Very well. I hope it's given you something to think about before you decide my fate.
Regardless, I suppose it's my turn to hold up my end of the bargain. Unfortunately, this door was designed to be absolutely secure against intruders."
What do I have to do to get it open?
"The door is controlled by two levers on either side of the barrow above. As if that weren't enough, you'll need keys to activate the levers. The keys are buried inside the Dorell and Tamrith family crypts.
I am sorry this is so much trouble."
Don't worry. I'll get the keys, activate the levers, and open the door.
"Yes. And then I get to find out what my fate is to be. I hope you're really thinking about this."

Unlock the door and enter:

"So here we are. The moment of truth. I can now look upon the face of the one who will be my judge.
I hope you understand that I am in no way trying to deny my past wrongdoings, nor would I argue that those acts should be forgiven."
I understand.
"If you read the letter in my pack, then you at least know that I've done what I can in the years since the war to make amends for the things I did.
Even if you decide to hand me over to the Ring of Daggers, I will at least die knowing I tried."
Do you want to know my decision now?
"No. I prefer you take your time making this choice.
I need to get out of these barrows either way, so you can take me to the Ring of Daggers or you can take me to the other side of the barrows and set me free. It's up to you."
All right. Let's get moving.
"I'm yours to do with as you will. Whatever you decide, I will go along. My fate is in your hands."
I want to ask you something.
"Of course. If there's anything I can tell you to increase my chance of meriting your mercy, I am more than happy to oblige.
What would you like to know?"
What crimes did you commit during the war?

"Please, don't ask me about that. Anything but that. Ask me about the things I've done since the war.
The things I did under King Ranser … they were terrible. Hard to think about, let alone speak of. Please. Anything but that."
Sorry. I want to hear you say it.
"Fine, damn it! You want to know what I did? I'll tell you.
When the Orcs turned on us, Ranser ordered me to arrest and interrogate all Orcs in Rivenspire, and I did. If they resisted or seemed suspicious, I had them executed. There."

Do you really think you've made amends?

"I know that one can never truly wipe the past clean, and certainly not in my case, but I've done what I can.
I've sent gold and gifts to the orphanage in Orsinium and I've spent years tracking down ancient tomes of Orc history for their library."
Have you done anything else?
"Um … yes? I've fed stray dogs, opened doors for old ladies and handed out moon-sugar candy to children.
That may sound petty, but the point is that I've tried."

How did you end up locked in the crypt?

"Well, originally the plan was quite genius. The Ring of Daggers has been on my trail for years, and everywhere I've gone, I've made sure to have a backup plan.
When I came to Moira's Hope, I found this tomb, and I added a few safeguards."
But why put the door controls outside?
"Well, part of that was the original design of the crypt, but I liked that about it.
The Ring of Daggers has ways of getting inside a man's head. I worried they might glamour me and trick me into opening the door. This seemed like a fail-safe."

If you lead him into Hoarfrost Downs, into the hands of Marisette, he'll simply say:

"I guess this is what I deserve. Very well. I accept my fate."

If instead you chose to let him leave Rivenspire:

"I don't see anyone from the Ring of Daggers. Does that mean … you've chosen to let me go free?"
"Yes. You're free to go."
"Thank you. Thank you so much. I promise you, whatever efforts I've made to redeem myself before, they will be doubled
Every hour, for the rest of my life, I will try to earn the reprieve you've given me."

Once you reach the gates of the Crypt of Hearts, Gabria will appear in a plume of smoke:

Gerard Althen: "Gabria! Thank you so much for coming. I need your help."
Gabria: "Don't worry, sir. Turenn planned everything. We've got you set up as a merchant in Orsinium."
Gerard Althen: "That's perfect. As it happens, I have friends there."
Gabria: "Then let us be on our way."

Gerard will then turn to you.

Gerard Althen: "Thank you for your mercy, friend. We won't be seeing each other again."

He then disappears with Gabria.

do you see him later in Orsinium?

This Elder Scrolls Online-related article is a stub. You can help by expanding it.
Retrieved from "https://en.uesp.net/w/index.php?title=Online:Gerard_Althen&oldid=2179065"
Categories:
Hidden categories: