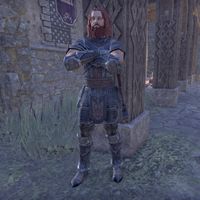 Fenrar is a Nord town guard and a survivor of the harrowstorm which wrecked Karthwatch. He can be found at his camp on the northern outskirts of the town and will accept any help to find fellow survivors.

At the conclusion of the related quest, he will relocate to Solitude with those you found.

Either Adelrine will direct you to him, or you can find Fenrar at his camp. As you approach you might hear him say, "It's all gone. Dammit, brother, where are you?"

Talking with him, he will explain what happened and asks for your help:

"You'll want to turn back from this damned town, wanderer. Those savage Reachmen finally got what they wanted. Karthwatch is gone. All that's left are husks of a once proud people."
What caused all this destruction?
"A storm straight from Mauloch's arsehole rose up over the town. It twisted everyone I know into monsters.
In the chaos, I saw my brother Hafskjar and his friend Bjora take people to the barrow west of town. But I've heard nothing since."
Why don't you check on them?
"Someone needs to warn the people away from Karthwatch. As the last of the Jarl's guard, the duty falls to me.
Look, I'm desperate to know if the survivors made it to the barrow. Whatever gold I have is yours if you'll find out what happened to them."
I'll see what I can find in the barrow.

After you agree to search the barrow, you can ask Fenrar questions:

"Finally a bit of good fortune. Thanks, traveler. No matter what you find in the barrow, I need to know. Tell any survivors you see to meet me here.
Hafskjar's the only family I have left. If I've lost him too, well… Just hurry back safely."
Tell me about the storm you saw.

"How does a man like me describe such evil? It looked like an infected wound in the sky. A mass of black and red swirling above my home. My friends' skin shriveled and turned gray as the storm … took something from them. That's when I ran."
Where were you when the storm appeared?

"I patrol the main road outside of town. Stopping travelers to ask their business, that sort of thing.
A sound like the mountain cracking in half shook me and then the storm rose up. I hurried back and got to the edge of town when I saw the chaos."

What's the situation in Karthwatch now?

"After that horrific storm passed, I entered the town to survey the damage. I found Reachmen and my neighbors turned into feral monsters. Young Beorlin nearly tore my arms off. Until I split his skull with an axe.
He was a good kid …."

Have Reachmen attacked Karthwatch before?
"All the time. Before we settled here, Reachmen raided constantly to claim the land. And our people would push them back. When King Svargrim gave us our own hold, we built the town hoping it would stand for generations. It only lasted five years."

Why would Hafksjar take people to the barrow?

"We train all guards to bring townsfolk there for safety during raids. I felt pride seeing him and Bjora performing their duty through such madness. They're our newest recruits and still very young. They were true guards of Karthwatch today."
You mentioned Bjora before. Who is she?

"Another member of the town guard. She's a tough warrior, that one. Her mother, Helsi, put a sword in Bjora's hand at a young age.
Hafskjar and Bjora have been close since childhood. I hope she keeps him safe in this disaster."

After you have rescued the survivors from the Reachmen and broke Bjora out of the enchantment, you can return to Fenrar and his camp. The others will have made it back before you arrive.

Fenrar: "Kyne's breath it's good to see you all. We've made it."
Helsi: "We'll find somewhere new. If we stick together, we'll survive this."
<Bjora notices you.>
Bjora: "Here's the one who saved me."
Fenrar: "We are in your debt, wanderer."

"So few of us are left. But, I'm indebted to you for those we still have. Especially my brother.
Hafskjar mentioned Reach witches captured Bjora. And they used some mind magic on her?"
They did. Hafskjar was instrumental in rescuing her.
"Heh. One note of pride in all this sorrow. I always believed Hafskjar would act like a true Nord when needed. Good to know I can rely on him in the days ahead."
Where do you go from here?
"The survivors will discuss what we do next. There aren't nearly enough people to take back the town. Maybe we'll go to Solitude and recover. But I know we must stay together. That's how we remain strong."

You can then talk with Hafskjar to complete the quest.

Fenrar and his fellow survivors in Solitude

After rescuing the survivors, they can later be found in Solitude between the bank and the inn. Fenrar will call out you as you pass by:

Fenrar: "Pleased to see you in Solitude, stranger!"

He can also be spoken with.

"Solitude can never be our home. Not like the frontiers of Karthald were. But it has strong walls, and we can bide our time here while we think of what comes next."