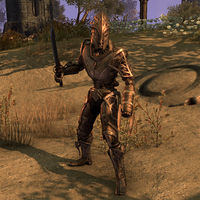 Factotum Sanitizers are Factotums that can be commonly found throughout the Clockwork City. Sanitizers within the Brass Fortress are non-hostile and can be pickpocketed, while the factotums outside the fortress are all hostile.

Sanitizers were apparently built with janitorial duties in mind as they can be observing scorching structures with fire and, for interior areas, sweeping floors. To perform the former they possess a device attached to their left arm that can create a concentrated burst of flame, or hurl fire in the air and explode similar to Firepot Spiders. The factotums that are sweeping inside the Clockwork Basilica do not have this attachment. All Sanitizers have a one handed weapon holstered that they will use in combat. As the Factotum Sanitizers in the Clockwork Basilica do not have the fire attachment, this weapon is their only means of attack which significantly limits their damage. 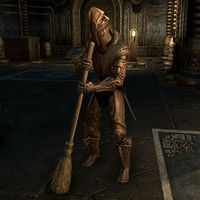 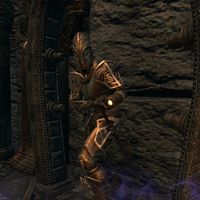 This Elder Scrolls Online-related article is a stub. You can help by expanding it.
Retrieved from "https://en.uesp.net/w/index.php?title=Online:Factotum_Sanitizer&oldid=2240406"
Categories:
Hidden categories: