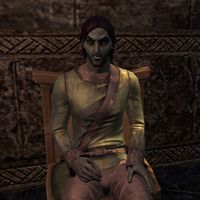 Evis Marys is a Dunmer found in the town of Narsis. He is encountered on the lower floor of Varlas House, being interrogated by Naryu Virian. He is the husband of Dala Marys, who is trying to leave Narsis to go to Mournhold.

When you enter Varlas House, Naryu will be interrogating Evis:

Evis Marys: "Please! I told you everything I know!"
Naryu Virian: "One more lie, and I'll make you stop talking. Permanently. Understand?"

"Listen. You need to let me out of here Don't tell anyone, and I'll make sure that you get rewarded. Just let me and my wife leave for Mournhold."

If you spoke with Naryu in a way that makes her stay and interrogate Evis further:

"Let me guess. You read the letter.
You're going to leave me with this crazy woman, aren't you? Curses on you and your family!"
Who's Vox?

"Vox? Never heard of her. Why would I be afraid of a Vox?
Now will you let me go so I can take my wife to Mournhold?"
[Intimidate] Tell me about the shipment or rot here. Your choice.

"No more torture! I've had enough for one day. I'll tell you the same thing I told the crazy lady.
The shipment contained something for the Maulborn camped outside town. That's all I know!"
And?

"And I messed up! I delivered the shipment to the wrong location.
But I fixed it. I fixed everything. Just you wait. Those missing villagers? It's no coincidence. You'll see. Vox will destroy you all!"

If you spoke to Naryu in a way that makes her leave the building in a puff of smoke, she drops a letter on the ground:

Naryu Virian: "Stay out of my way. You've been warned."
Evis Marys: "Um, could I have that letter back? I'd really appreciate it."

Before picking up the letter:

"Just give me that letter and let me go. No need to get involved in things that don't concern you, right?
Please! Let me go!"
Who's Vox?
Tell me what's going on and I'll let you go.
"Ha! That's hilarious. Let me go?
You can tell the house officials to go lick a guar. They don't know what's coming. None of you do."