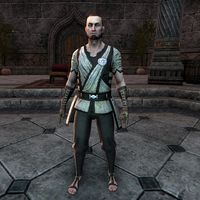 Erold is a Breton Star-Gazer who can be encountered upstairs in the Crossroads Tavern in Belkarth. When you talk to him upon receiving the Star-Gazers' blessing, he will give you The Corrupted Stone quest.

After you complete The Missing Guardian, Erold will relocate to outside of Star-Gazers' Observatory and will not be interactable anymore.

When you are at the Crossroads Tavern, Erold wants to talk to you about the Celestials, and will say "The Apex Stone could be the key. If only I could get my hands on the tools those ancient priests possessed." when passed by. You can speak to him to start the quest:

"Excuse me. Hara says you've joined our number. That's very exciting, because I've discovered something that can help us understand who or what the Celestials really are."

"I've learned from certain ancient writings that this may not be the first time the Celestials have appeared in Craglorn! These legends describe a link between Mundus and the stars, right here in Craglorn. Apex Stones, they call them."

How does that help us?

"I know where to find one of these stones—a great mundus stone dedicated to the Celestial Warrior. But it's locked deep in the ruins of Kardala. Only a Skystone amulet, the kind worn by ancient Nedic priests, can open the way."

Where do we find a Skystone amulet?

"Many Dwarven religious texts refer to a Dwemer site called Mtharnaz. A high priest named Arnming wrote that he wished to be buried there, "among the masters of heavenly stone." His burial site is our best chance of finding a Skystone amulet."

What can you tell me about Mtharnaz?

"Nedic writings suggest that the Nedes may have been slaves at sites like Mtharnaz, and they may have adopted some Dwarven practices. But the Dwarves are such a mystery. It's impossible to guess what those practices might have been."

Tell me more about the Nedes.

"We don't know a lot about them. They were an early race who settled in Craglorn. What history we do know tells a tale of enslavement and invasion—the Dwemer, the Ayleids, and finally the Yokudans, all had their way with the Nedes."

What's the connection between the Nedic priests and the Skystone amulet?

"The Nedes apparently followed a variety of customs and religious practices, adapting to whatever invaders were currently overwhelming them. One of these customs was star-worship. The Skystone amulet was a symbol of the priestly office."
What do you expect to learn from the Warrior's Apex Stone?

"Nedic writings talk about the Apex Stones in a variety of ways, but they all agree that there is a connection between the stars and these stones. If we can understand that connection, perhaps we can find out how to stop the Celestials."