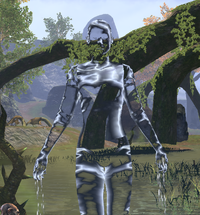 An Ehlnofey guardian
"In days long past, our bones longed for the sun's sweet kiss, for friends we knew in life. But our restless wanderings caused untold suffering. We went far away, to be forgotten by the world. To die."
— Olphras 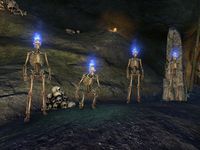 Ehlnofey (or Earth-Bones) are ancient extinct beings descended from Aedra that chose to stay on Mundus, creating the modern mortal races. Many of them sacrificed themselves, similar to Y'ffre, and few like Dringoth continued to wander, until being imprisoned in the Bone Orchard.