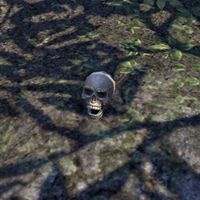 Dringoth is an ancient spirit, presumably an Ehlnofey, inhabiting the skeleton of a Bosmer, found in the Bone Orchard in the forests of Grahtwood. His bones were used by necromancers for the creation of other undead skeletons.

Dringoth was banished by Olphras from the rest of his family after a disagreement on how visible they should be to the outside world. Once a family of wandering immortals, they eventually realized their travels brought untold suffering wherever they went and decided to meet a true death away from the living. Dringoth's wanderlust and selfish desires prevented him from agreeing with them, however, and he continued to wander and destroy what lay in his path (though never specified, it's apparent by using the quest ability Dringoth's Rib that his presence causes those around him to frenzy and attack allies on sight).

The Wood Elves from Falinesti, victim of his destruction, tricked Dringoth by asking him to join their traveling city. Feeling excited and in the comfort of friends, Dringoth slept and Wood Elves planted a seed in his skull. From it grew the Barrowbough Tree where he was to be imprisoned forever.

The Wood Elves then hunted down the rest of his family and interred them in the Bone Orchard beneath shrines to Y'ffre with a ritual that would cause them to never be forgotten. For this reason, they can never die and their souls are prevented from moving on.

"Wonderful! Thought I'd be yapping here for eternity. Blasted Wormies only have eyes for the empty ones.
Very well, tie me to your belt and we can get started. No time to lose!"
What are you talking about? And how can you talk?
How can you breathe? You just do, without thinking much about it. It's the same with me and talking, or Worm Cultists and digging up old bones.
Didn't ask if they belonged to anyone, did they? The Wormies just started making skeletons."
The Worm Cult is creating undead here?
"Yes! Pieces of me are all over the place. It's rather disconcerting!
I'm probably not the first skeleton you've had to reassemble, and I doubt I'll be the last. But once I'm walking again, we can figure out what the Wormies want with the Bone Orchard. Deal?"
All right. I'll help you get your bones back from the Worm Cult

"You have no idea how good this feels! To be whole again, and walk with my own two legs. To have legs at all!"
What's next?
"Next? Oh, you mean the Wormies! Can't leave them here, digging up bones that dig up bones."
Do you know why they're digging?
"No idea! That's why we'll need to investigate, yes? That's the thing for us, investigations all around!
Their biggest dig site is nearby. Hard to miss it, really! Unless you're one to miss a hole in the ground."
All right, let's go
"Charging off like Fildenir Blood-Drunk, eh? Don't expect me to lend a hand. Perhaps a rib will do?
Point it at any Wormie skeleton and I'll have it fighting at your side! No, it's no trouble, you can thank me later. Onward to the dig site."

After finding the giant skeletons:

"The Wormies must be here for what's under the Barrowbough. With enough of the little skeletons, they'll be able to dig up the big ones.
I knew I shouldn't have said anything to that Ethruin fellow."
Who? What did you tell him?
"The Wormie leader. Told him he'd have no use for the big bones in the ground with the Barrowbough to keep them sleeping.
But if he digs up the Barrowbough's roots, he'll kill it. Then he can build giant Wormie skeletons to stomp around."
What's the Barrowbough?
"You didn't notice it? The enormous tree in the middle of the Bone Orchard?
Nobody takes a moment to look up these days. All this beauty directly above you and you're staring straight at the dirt. Typical."
How can we stop him?
"There are others like Goradir sleeping beneath the Barrowbough. If they knew what the Wormies wanted, they'd help!
But we can't get there without Spinner Amariel's help, and she's not to happy with me."
Where can we find Spinner Amariel?
"She's up on the ridge overlooking the Bone Orchard. Maybe I shouldn't go with you? No, that's silly, I'm sure she'll be happy to see me.
But just to be prudent, I'll let you do the talking."

"When Spinner Amariel sees me, she'll be surprised! Hopefully not enough to scatter me across the Bone Orchard. Again.
It'll be fine."
What's so special about the Barrowbough?
"What's so special about a great tree the size of a sailing ship, sealing the old bones beneath it in eternal slumber?
Not much beyond all that, I suppose."
Why were the bones sealed?
"To keep people out! Why else? Spirits hate disturbances
And to keep the bones from wandering away. The Barrowbough grew around the oldest skull in the ground, you know."

I didn't see a skull.
"The big hill in the center of the orchard? I suppose it doesn't look much a skull now. Been buried too long."
Whose skull is it?
"Ha! Heh. Most think it belongs to the god Y'ffre.
His death made the bones of the earth, or so it goes. Depends on who tells the story."
Is it really Y'ffre's skull?
"Ha! No, of course not. Nobody that important."
Whose skull is it, then?
"I, ah, don't know. Yes, it's left me completely.
Wait, did you hear that? Could've sworn it was a Wormie. Ha! Must've been my imagination."

Who is Spinner Amariel?
"Brilliant young woman. Keeps records of all the bones buried here, big and small alike. Every dead Elf in the ground is important enough for her to track!
Suppose it's why she was annoyed with me for inhabiting these Elf bones, instead of my own."

Whose bones do you inhabit?
"No idea!
Some dead Elf from another era. Probably won a war, lost a war, or refused to fight in a war. You know how it goes with these things."

After speaking to the Spinner:

"We have a history built upon the bedrock of respect and mutual appreciation! We're just having a bit of a spat, that's all."
For how long?
"Thirty or... fifty years, I think? Yes, let's say fifty.
Fifty years?
"Give or take a decade. It's my fault, really. I was insufferable!
Don't know how she put up with me, to be honest. Taking me apart was the best thing for us both!"
So there are no hard feelings between you?
"Not at all! Well... I do wonder how she'd fare buried up to her neck while I sit in a nice, warmly lit cave, but it's a passing fancy.
She used to visit my skull and sing to me, even when we were squabbling. That's true friendship, right there."

If you convinced Olphras to let Dringoth help:
"If it weren't for you, I'd be well and truly buried right now. You're a real friend."

If (?)
"I can't believe Olphras let me stay like this. Come, let's help the old bones drive back the new!"

After defeating Ethruin, you can speak with Dringoth again. If you decided he should be exiled, you will need to go outside to speak with him.

"Can't say I'll miss throwing back wave after wave of Wormies and their bony minions. But now I have a chance to see the world! Meet new and interesting people!
Only now I won't accidentally smash everything in my path. Rather embarrassing, that."
What will you do now?
"See the world, I expect. Folks may not take kindly to chattering Elf bones, but it's better than stomping everything to jelly, eh?"

You can then ask where he plans to travel first. Dringoth will be excited and will mention other places he has been:

"I'm sure I'll see you around. The world's only so big! Bigger now, I expect! How exciting!"
Where are you off to, first?
"You know, I hadn't thought about it. I usually just … pick a direction and start walking. Though sometimes that doesn't work out so well.
Take the Sea of Ghosts. Seems like a fun jaunt, yeah?"
The Sea of Ghosts
"Up north, very north. Lots of water. Ice like you wouldn't believe.
But the barnacles … oh, do they chafe! Took me a decade rolling around in desert sands to rid myself of those."
"You've been to the desert?'
"Oh, yes. Loved it! Warm, dry, and the sand feels so good on my bones!
Unfortunately, the people there aren't big on walking skeletons. Not many are, but there in particular. I was on my best behavior, too! They had no need to react like that."
What happened?
"When they saw me coming they took for the hills, the caves, whatever was available to hide in. By the time I reached a city it would be completely deserted! Made me terribly lonely.
But that was long ago. I should visit, see how things have changed!"

If he was allowed to stay in barrow, you ask about his future plans:

"Quite the brawl, eh? If that doesn't strike terror into the heart of the Wormies, I don't know what will!"
What's next?
"We've taken them down a notch! The more bones they send us, the more we'll have to fight them. Bet the wormies never thought they'd be on the other end of it, eh?"

"Suppose you'll be moving on, then. You should come visit, tell us tales of your travels. We're a lot alike, you and I!"
What will you do now?
"Oh, kick around here, I expect. Catch up with old friends. Scare a pilgrim or two.
All this dirt …. it's rather dull, isn't it? The Wormies were the most exciting thing in ages!"
You miss them.
"No! No, no no … well, a bit, in that impending doom sort of way. The Wormies mixed things up! Even got old Olphras kicking around again.
And I met you, so it wasn't all bad. I should really them a letter."
A letter? To the Worm Cult?
"Dear Wormies! Thanks for the excitement. Sorry about that Ethruin fellow, but he was a bit of a bastard, wasn't he? Perhaps we should catch up over some deathbell tea. Signed Dringoth.
Do you think they'll write back?"
I can't say for certain.
"That seals it, then! Now to find some vellum … hot wax … a quill, definitely a quill.
I saw some ink up in Spinner Amariel's cave. She'll let me borrow some, I'm sure of it!"