Bards still sing of a glorious battle between Reman I's Dragonguard and a "great Black Beast" at Doomstone Keep. The veracity of the bard's verse remains a subject of debate, but the castle's masonry bears the scars of a hard-fought battle against a titanic foe. 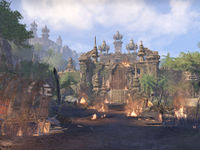 Doomstone Keep is a ruined castle and Striking Locale in Southern Elsweyr. The area has evidently been hit hard by Dragon attacks, judging from the flames, sandbag fortifications, and charred corpses that litter the grounds. A passageway on the right-hand side of the keep leads to the caverns below, only unlocked for the related quest, though they can still be accessed after the quest.

This Elder Scrolls Online-related article is a stub. You can help by expanding it.
Retrieved from "https://en.uesp.net/w/index.php?title=Online:Doomstone_Keep&oldid=2284855"
Categories:
Hidden categories: