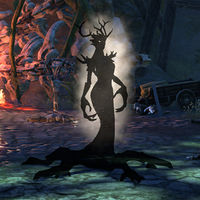 The Dark Root is a shadowy spriggan found within Elden Hollow II. It is summoned from the first portal that Kargand enters from after Dubroze the Infestor's defeat, and is the first boss.

Its unique drop is the Dark Root of Restoration.

As a boss type creature, the Dark Root is immune to all forms of crowd control effects.

A basic melee attack that does high physical damage.

The boss targets a random player with a beam of light that does high magical damage. As the fight progresses, this attack will target more players and do more damage, thus players should kill the boss as soon as possible to make the fight easier.

The boss summons two hoarvors, a blue Mystic Guardian and a green Frenzied Guardian. When killed, the hoarvors leave behind a blue and green mist respectively. Standing within the blue mist will greatly increase your maximum magicka and magicka regeneration, while standing in the green mist will increase your maximum stamina and your stamina regeneration. This can be very useful for players to regain their resources.

The Dark Root is associated with four achievements:

This Online-related article is a stub. You can help by expanding it.
Retrieved from "https://en.uesp.net/w/index.php?title=Online:Dark_Root&oldid=2087257"
Categories:
Hidden categories: