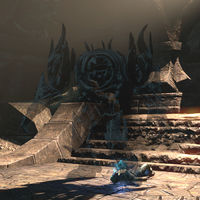 The Murklight is a shadowy lurcher found within a pocket Daedric realm guarding Bakkhara. The realm is accessed during the events of Elden Hollow II, and Murklight serves as the second boss.

Its unique drop is the Murkhammer.

As a boss type creature, the Murklight is immune to all forms of crowd control effects.

Consuming Shadow
The boss summons pools of shadow under each player's feet. This does high magical damage over time as indicated by the red circles. This attack is usually followed by Eclipse.

Eclipse
The boss envelops the room in shadow, and the red circles turn white. Players should now stand within the white circles, as the area outside the white circles now do high magical damage over time.

The boss stomps its foot, dealing high physical damage as indicated by a red cone.