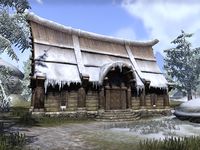 Applewatch is a small settlement in northern Cyrodiil, southwest of Fort Dragonclaw and west of Bruma.

The settlement consists of only one building: the Applewatch Inn, owned by Leono and Rasala Draconis. The bard Javid also lives there. The Argonian Maid—An Oral Tradition can be found on a table. Another book, Dealing with Werewolves, can be found in the graveyard behind the inn. A copy of The Homilies of Blessed Almalexia can be found on the nightstand next to the bed, closest to the door.