The UESPWiki – Your source for The Elder Scrolls since 1995
< Elder Scrolls Online: Mounts: Equines / A
Jump to: navigation, search

Mounted knights are both powerful and prestigious, so it's no surprise the Three Alliances compete to breed the strongest and most majestic chargers for their armored cavalries 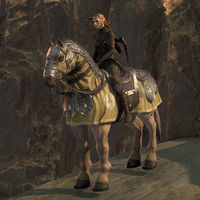 The Alliance War Horse is available in the Crown Store as part of the Any Race, Any Alliance Bundle for 020002000

. This mount's appearance is not affected by your character's riding skill. Its default name is "Destrier".

It features the livery of the Aldmeri Dominion, Daggerfall Covenant, or Ebonheart Pact depending on the allegiance of the player character. When placed in a home, the appearance depends on the allegiance of any player looking at it, so the same horse can simultaneously appear different to multiple players.

The Alliance War Horse was previously available on its own for 025002,500