War dogs can be found in the armies of all three Alliances, mainly in the capacity of aides to the military police. They are as loyal to their masters as they are savage to their enemies. 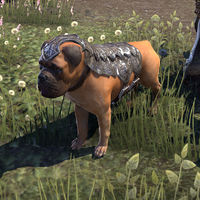 The Alliance War Dog can be acquired as part of the Any Race, Any Alliance Bundle. Previously available from the Crown Store on their own for 010001,000

. The appearance of the dog is specific to your character's alliance. When placed in a home, the dog's appearance depends on the allegiance of any player looking at it, so the same dog can simultaneously appear different to multiple players. Its default name is "Bruiser".

This Elder Scrolls Online-related article is a stub. You can help by expanding it.
Retrieved from "https://en.uesp.net/w/index.php?title=Online:Alliance_War_Dog&oldid=2424023"
Categories:
Hidden categories: