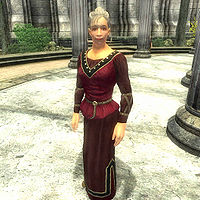 Renee Geonette is an Imperial commoner living in the Imperial City's Temple District with her husband, Salomon Geonette. When she is not in the Imperial City, Renee travels regularly to Anvil to visit Mirabelle Monet; while there, Renee stays at The Flowing Bowl.

Renee wears a set of middle class clothing: a burgundy linen shirt, burgundy linens and a pair of pigskin shoes. She carries her house key and a small amount of gold.