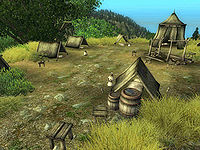 Located just downhill from the Kvatch refugee camp, at the end of a rough path leading off the Gold Road, Red Lane Camp is easily one of the biggest camps in Cyrodiil. It consists of 6 small tents and a large tent, all with bedrolls lined up inside. Additionally, four sacks are scattered around the campsite, including two food sacks and two sacks with minor loot. Behind one of the tents, two clutter barrels are almost overgrown with grass, but have a copy of Brief History of the Empire, v 4 sitting on top. Eight stools have been set up as well, most of them in a circle around the empty cooking pot found dangling above an unlit and quite messy fireplace. The ruins of Dasek Moor can be found right beside the camp. A look to the southwest reveals the rooftops of Anvil, and the Strid River runs to the south, with the mountains of Valenwood behind it. A random Oblivion Gate might open up southeast of the camp during the Main Quest, but it isn't close enough to cause a problem. A few plants gives a bit of color to the camp, including a Bergamot plant and two Milk Thistle plants.

Troll Candle Camp, where master trainer Alawen resides, is just to the south of here, and her spontaneous hunting trips often cause her to climb the hillside, where she will most likely die at the hands of the bandit inhabitants of Red Lane Camp, making it impossible to complete the Marksman Training quest.