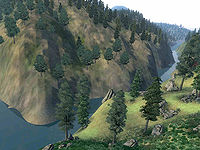 The Strid River - looking into Valenwood

The Strid River forms most of the border between Cyrodiil and Valenwood to the south. (map).

There are very few landmarks or anything else of note along the length of the river, since most of it lies beyond the invisible wall, preventing you from exploring its shores. Near its mouth, however, there are a few Nirnroots, including one on a small island in the middle of the river. There are no other Nirnroots along its entire length, however, and the way the slopes interact with the invisible walls makes it possible to get trapped with no way of getting out without fast-traveling or using the console.