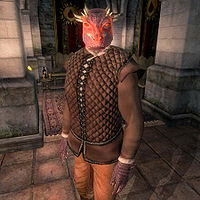 Grey-Throat is an Argonian commoner who lives in the Imperial City Temple District. He is one of the members of The Order of the Virtuous Blood, and spends most evenings at the Order's sanctuary in the basement of Seridur's house.

Grey-Throat wears a quilted doublet, tan linens, and a pair of thick cowhide shoes. He carries the key to his house as well as a small amount of gold.

When you first meet him in Seridur's house during the related quest (he will not appear elsewhere beforehand), he will decline conversation saying, "Hear out Seridur, first. Then we'll speak." He will become more talkative after Seridur says, "Vampires are nasty creatures. They drink the blood of others to conceal their true nature. Such trickery makes them difficult to find. You may ask Gilen Norvalo or Grey-Throat about these creatures as well. They've learned much." He will offer his assistance immediately after, asking, "How can I be of service?" He will then provide information on both Roland Jenseric and vampires in general: "Roland was very much the loner. He never married, and was rarely seen outside his house. I'm surprised his secret wasn't discovered sooner." and "The vampire cannot exist in the daylight for long. As the sun's rays strike his flesh, it will burn as if on fire." When you dismiss him he will warn, "Be ever vigilant. Vampires are creatures of deceit."

Once you've progressed in the quest past searching Roland's house, Grey-Throat will have new advice for you; as reminded by Seridur: "I believe that Grey-Throat and Gilen may have more information for you regarding these creatures." About Roland, he will say, "If I were you, I'd go to the cabin in the daytime. That way, if he begins to overpower you, the outside can be a sanctuary." He will also give some more general advice about vampires, informing you that "Vampires have a weakness to fire. You may wish to use this to your advantage."

Once Roland is dead, Grey-Throat will reflect: "A shame he had to die. Before he turned, he was a fine man." However, if you choose to believe Roland over Seridur, Roland will direct you to speak to Grey-Throat once again: "I know about Seridur and his 'secret order.' What better way for a vampire to hide than to pretend he hunts them? You may want to speak to Phintias at the First Edition bookshop in the Market District of the city. I know he goes there occasionally. I doubt that he's told Gilen and Grey-Throat anything, but you could always try." If you lie to Seridur about Roland not being home, Grey-Throat for his part will add, "Ashame [sic] he wasn't there. I thought that you'd be able to put an end to this madness." He will also provide his opinion of Seridur to help you decide who exactly is telling the truth: "Seridur is an honorable man. Forming the Order shows just how much he cares about the Imperial City and protecting its people." Lastly, he will give a little more information on vampires, warning, "Vampires rarely live alone. They tend to have others of their ilk around them for protection."

After speaking with Phintias and learning about Memorial Cave, Gilen will mention something strange about Seridur: "Oh, I believe he left a message with Grey-Throat. Something about not being here for a few days?" Grey-Throat confirms this, saying, "Seridur said we should meet without him for a few days. He said something about doing field research? I'm sure he'll return soon." When you find Seridur in the cave, part of his monologue will include threats against Grey-Throat (as well as Gilen and Roland): "After I'm through with you, I'll find Roland and finish what I started. I knew hiring you was a mistake, but I had to keep up appearances. The damn "Order" insisted we get you into the picture. I think after I'm done with Roland, Gilen and Grey-Throat will have to be dealt with."

Once Seridur is finished instead and you've told Roland, Grey-Throat will see where things went wrong and apologize: "It's good to see you again. I'm so sorry that we didn't realize Seridur's deception. He was a traitor. Thanks to you, the Order lives on. Long live the Order!" When asked about Roland he'll graciously welcome him: "He'll make a fine replacement for Seridur. It's the least we can do." He'll also have one last piece of advice for you against vampires: "Touching a vampire, or even the corpse of a vampire, can result in infection. Do be careful! If you want to know more, browse our library." Roland himself will also be ready to speak with you, mentioning Grey-Throat's intense participation in the rebuilding of the Order: "It's so good to see you again. I've spent a good deal of time speaking with Gilen and Grey-Throat. They agree that the Order should live on." After your honorary induction to the Order of the Virtuous Blood, Grey-Throat will refer to you as "What can the Order help you with, Sister/Brother?" He will be just as welcoming to Roland, reaffirming, "I'm pleased to call him brother."